All you need to know about troponin measurements

This article features a general background of the analytical characteristics associated with cardiac troponin testing.

It addresses the following areas:

Troponin is one of the regulatory proteins in muscle tissue. The heart muscle, or myocardium, contains a cardiac-specific type of troponin (cTn). In case of myocardial injury and cellular damage, cTn is released from the myocardium into the blood. Specific monoclonal antibodies against cTn have enabled the development of cTn-specific assays that can measure the concentration of cTn in the blood. Since the first publications on cardiac troponin (cTn) in the 1970s, around 20.000 scientific reports on this powerful biomarker of myocardial injury have been published. Over time, cTn assays have improved their analytical performance and become the designated laboratory biomarker for diagnosing myocardial injury and myocardial infarction (MI). Finally, the larger the myocardial insult, the more troponin is released into circulation. Consequently, quantitative cTn results also provide prognostic value in support of risk stratification and patient management [1,2,3].

What is the 99th percentile URL and why do we use it?

Because cTn is not a constitutive blood protein, blood levels of cTn will be extremely low in healthy individuals without myocardial damage. In contrast to many other blood biomarkers that can show abnormally low and abnormally high levels, the clinical interest in cTn levels pertains therefore to increased levels only.

The first generations of cTn-assays were, not surprisingly, hardly able to report quantitative cTn results in individuals NOT having myocardial injury. In most of these cases, a “lower than level of detection” (< LoD) result was reported. Even today, many of the contemporary cTn assays report measurable cTn levels in just a few percent of healthy controls.

To some degree, this also explains the origin of using the 99th percentile URL as the cut-off between normal and increased cTn levels. When the usual 97.5th percentile cut-off would have been chosen, e.g. as applied for most biomarkers, many contemporary cTn assays would have struggled to generate more than 2.5% measurable results required for establishing a 97.5% cut-off based on non-parametric statistics [4].

Consequently, cTn assay manufacturers are required to provide their assay-specific 99th percentile URL in the IFU. However, this value will be typically based on a regional population of healthy controls, which might not provide the optimal value for all users across the globe. Factors like age, gender, and ethnicity can and will affect cTn levels and significantly influence the URL. A careful local validation of this IFU-based 99th percentile URL is therefore advisable [7]. Moreover, in case any local population bias is anticipated, local derivation of the 99th percentile URL cut-off is recommendable, as will be discussed later.

Aside the 99th percentile URL cut-off, the precision of the assay at that level is also important, as we will discuss later.

Determination (and monitoring) of the 99th percentile URL

Several co-morbidities and/or confounders are known to increase the circulating level of cTn [9,2]. When some of the results used to determine the 99th percentile URL are affected by such co-morbidities, the 99th percentile URL can easily be affected as well. Consequently, all subjects enrolled in the healthy reference population need to be pre-screened to reduce to potential influence of such factors. The importance of such thorough pre-selection in determination of the appropriate 99th percentile URL of cTn assays has been shown in many studies [10,9,11]. Overall, it is recommended that selection of individuals for healthy reference populations should at least include a health questionnaire and several laboratory tests to ensure normal renal function and absence of congestive heart failure.

Many studies have reported alternative cut-offs for the various cTn assays, deviating from the 99th percentile URL as provided by the manufacturer in the IFU, and often associated with superior diagnostic performance [12,13,14,15]. Current best practices, based on using the 99th percentile URL with cTn assays to achieve optimal diagnostic accuracy for myocardial injury, should therefore include critical monitoring of the cTn-assay in routine use with respect to calibration and verification of precision, especially at the diagnostic cut-off [16,2].

Over time, various generations of troponin assays have been developed with ever-increasing sensitivity and ever lower 99th percentiles. Consequently, as illustrated in Figure 1, the newer generations of cTn assays can detect increased cTn levels earlier, associated with increased sensitivity for myocardial injury and faster rule-in and rule-out of ACS. However, the latest generations of high-sensitivity (hs-cTn) assays also caused a lot of discussion and even controversy regarding their optimal use in routine clinical diagnostics. Especially the increased risk for over-diagnosis of MI [2] and the increasing complexity associated with the use of hs-cTn assays have raised some general concerns [2,17]. 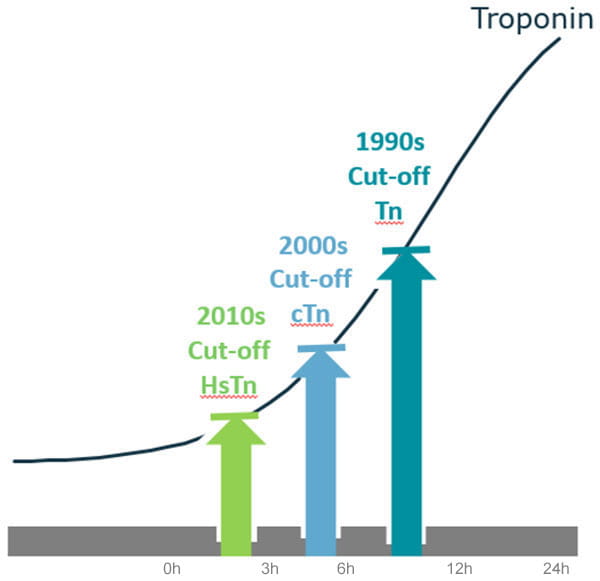 The dynamics of troponin and the need for serial measurements

After an acute cardiac insult and a brief period of local ischemia, myocardial cells are starting to die (necrosis) and cardiac troponin is released. Typically, during the first several hours after the insult, patients start feeling a blunt pain in/on their chest and/or in their arms. Obviously, they will seek urgent medical attention and in most cases be admitted to a chest pain unit or emergency department (ED) of a nearby hospital. Depending on the type of MI, cTn levels reach their maximum between 6 hours and 3 days, and then start to decline [18]. Normally, cTn levels require several weeks to return to baseline, provided that no incremental myocardial damage is inflicted during that time.

According to the current definition of MI and the current clinical guidelines, acute MI is diagnosed in the presence of acute myocardial injury, evident by an increased and significant rise and/or fall of cardiac troponin (cTn) levels, in combination with clinical signs of myocardial ischemia, such as pathological ECG changes [1,6].

The following chapters will focus on both requirements for the various categories of cTn assays in more detail.

All about sensitivity and precision 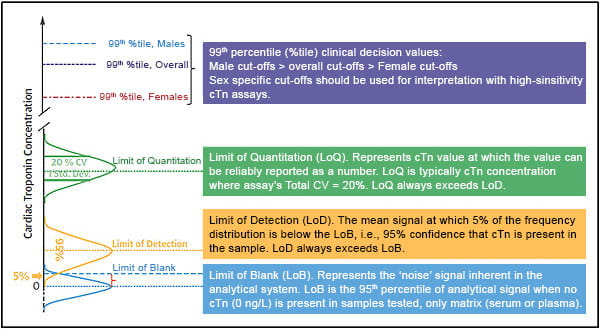 Figure 2. Various Analytic Definitions to Familiarize Clinicians (with permission from Journal of the American College of Cardiology [2].

Because of the ever-higher sensitivities of cTn assays, ever-lower levels of myocardial injury are detected. Although such minor injury can be caused by a small size infarction, more often the etiology behind it is not ischemic injury, but rather one of the many other causes of myocardial injury, including chronic disease [20,21,22,17]. The high sensitivity of hs-cTn assays can therefore cause confusion in the diagnostic work-up of chest pain patients, especially when positive cTn results are not confirmed by positive ECG results [21,22,2].

Aside the sensitivity, which depends primarily on the 99th percentile, also the precision of the assay plays an important role in the diagnosis of acute myocardial injury. Newer generations of cTn assays typically have higher sensitivity as well as higher precision (or lower imprecision). As mentioned earlier, the total imprecision at the 99th percentile URL classifies the assay as guideline acceptable (CV ≤ 10 %) or clinically usable (CV > 10 % and ≤ 20 %).

The better the precision is, the higher the probability that a found difference between two serial samples is significant and indicative of acute myocardial injury.

All about change, when to draw and measure the 2nd sample?

In clinical practice, a significant change in cTn levels between two serial samples will be detectable earlier with a “guideline acceptable” assay than with “clinically usable” assay, and with an hs-cTn assay even earlier. In other words, for detecting acute myocardial injury with a “clinically usable” assay one will need more time between the serial tests compared to a “guideline acceptable” test. To appreciate the difference, please refer to Figure 3 where the difference between the two classes of cTn assays on detecting a significant change in cTn levels (“delta”) is illustrated. In this model, we have assumed that the 99th percentile of both assays is the same, illustrated by the dotted blue line. 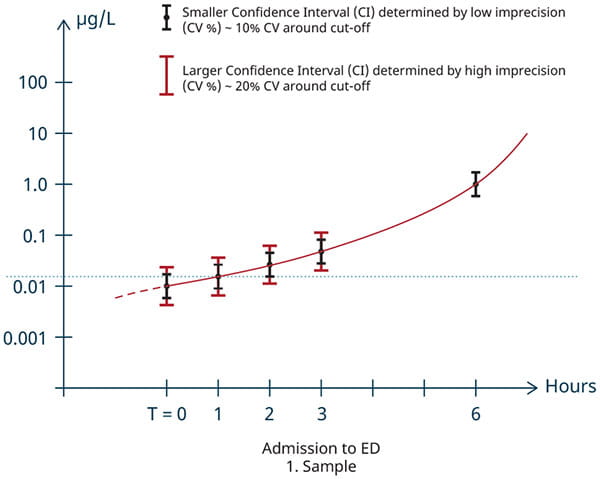 To diagnose acute myocardial injury, it is essential to demonstrate a significant change “delta” in the level of cTn between two serial cTn results with at least one result above the 99th percentile URL. When both cTn results from two serial samples are found above the 99th percentile URL, then such a “delta”, most preferable a pre-defined assay-specific absolute change [20], is often larger and easier to be detected. This change is indicative of an ongoing acute pathology [1,6]. As shown in Figure 3, an assay with lower imprecision will be able to detect such significant change in cTn levels earlier and require a shorter interval between serial measurements.

Figure 3 also illustrates that a decrease in the cut-off would lead to faster rule-in for both contemporary and high sensitivity assays, and why it is recommended for users of troponin assays to determine a cut-off based on their local population, especially when local population bias is anticipated [7]. For example, in clinics treating predominantly a sub-population of patients, e.g. young, old, renal disease patients, or a particular ethnic group.

Based on current literature and best practices, a time interval of 6-12 hours between sample draws for serial cTn testing seems to provide optimal diagnostic accuracy for most currently used contemporary cTn assays. More sensitive assays, including the high-sensitivity assays, can provide adequate diagnostic performance within 3-6 hours, or even faster in selected patients or by applying very rigorous criteria [1,6,23].

Irrespective of the cTn assay used in local clinical practice, in general it is recommended to develop a standardized serial sampling protocol in clinical institutions for patients admitted with suspected ACS, appropriate for their local cTn assay [10,2]. The protocol should include the thresholds for significant change, indicative of acute myocardial injury.

Detecting increased and changing levels of cTn, in combination with clinical signs of ischemia, will support the diagnosis of acute MI and referral of the patient to further diagnostic work-up and/or invasive management.

When using a contemporary assay, myocardial injury will be diagnosed by a cTn measurement at entry of ED and repeating the cTn measurement after the appropriate sample interval of about 6 hours, dependent on the assay used.

The upside of hs-cTn testing is clearly related to its high sensitivity. High sensitivity results in low risk of missing out on patients having an acute MI. High sensitivity also supports early and safe rule-out algorithms, even when a lower percentage of patients might benefit when compared to the rule-out performance offered by contemporary cTn assays [22,25,26].

The downside of the increased sensitivity of the hs-cTn assays is the decreased specificity and increased risk for false positive results suggesting ACS. Although the risk for missing MI is smaller when using an hs-cTn assay, especially elderly patients without ACS, or patients with other morbidities such as renal disease might be showing moderately increased and/or changed levels of cTn. This increased level of false positives associated with hs-cTn testing will result in an increased need for diagnostic follow-up, and a risk for inappropriate treatment [25,26].

Medical facilities and clinical staff are trying to avoid such unjustified follow-up, for both logistical and economic reasons. The additional costs and care associated with unjustified diagnosis of MI associated with the lower specificity of hs-cTn testing is therefore a growing concern [25,26]. Moreover, implementation of a hs-cTn testing is associated with several practical requirements to ensure its appropriate diagnostic and clinical use [2]. Despite these concerns, the introduction of hs-cTn assays will further enhance the early diagnosis and safe rule-out of myocardial infarction and therefore presents an essential biomarker for the clinical lab in the diagnostic work-up of patients with suspected ACS.