Differentiating self-limiting from serious lower-respiratory-tract infections (LRTI) based on medical history and physical examination is challenging in primary care. Many family physicians (FPs) empirically prescribe antibiotics to most LRTI patients.

The use of C-reactive protein (CRP) point-of-care testing as an additional diagnostic tool can enable FPs decrease antibiotics prescribing, without compromising patient recovery.

CRP point of care can decrease physician diagnostic uncertainty and may facilitate patient reassurance. The greatest value of CRP point-of-care testing in primary care lies in ruling out serious disease.

A cut-off value of 20 mg/L can be used to withhold antibiotics treatment in most patients with a low value (>75 % of LRTI patients in primary care).

Patients with a CRP value higher than 100 mg/L (~5 % of LRTI patients) should receive antibiotics, while patients with intermediately elevated values between 21 and 99 mg/L (20 % of patients) should be carefully assessed based on the combination of medical history, physical examination and CRP value, and a delayed prescription for antibiotics can be considered in selected cases.

Based on our findings the use of CRP point-of-care testing in respiratory-tract infections in primary care should only be advocated in LRTI and rhinosinusitis, and only when seeking additional diagnostic or prognostic information or to ensure further patient reassurance.

The superior gold standard, high-resolution computed tomography, is far from feasible in primary care LRTI patients [7]. However, in the light of possible pneumonia and with no readily available diagnostic test to rule out this condition, many family physicians (FPs) empirically prescribe antibiotics to most LRTI patients, both for pneumonia and acute bronchitis.

Several studies have indicated that to practicing FPs the needs of individuals with potential infections and maintaining good relationships with patients outweigh the perceived risk of bacterial resistance [8-10]. Yet despite this, many FPs do acknowledge that many prescriptions are unnecessary [11] and admit feeling uncomfortable in that particular situation [10].

Treatment recommendations in guidelines are mainly based on clinical diagnoses [12]. Yet with the obvious inability to accurately make these diagnoses in primary care, recommendations are hard to follow. Everyday decisions about when to prescribe antibiotics for LRTI constitute a significant part of the burden of antibiotics use that drives antibiotics resistance [13]. The use of ancillary diagnostic tests at the point of care may facilitate the diagnostic process.

This paper will focus on the use of C-reactive protein point-of-care testing for RTI based on studies performed in primary care.

C-reactive protein, originally named for its capacity to precipitate the C-polysaccharide of Streptococcus pneumoniae, was the first acute-phase protein to be described [14].

The acute-phase response comprises the non-specific physiological and biochemical response to most forms of tissue damage, infection and inflammation [15]. C-reactive protein is a widely used and acknowledged marker to diagnose and monitor infections in secondary care. With the emergence of point-of-care devices in the 1980s Melbye et al. were the first to evaluate the diagnostic value of the test in LRTI in primary care [16].

Unfortunately, the widespread introduction of point-of-care CRP testing in the Scandinavian countries was not accompanied by appropriate training for clinicians. Hence, in some settings this has sometimes led to an overuse of CRP testing in mostly mild respiratory-tract infections, often followed by an unnecessary antibiotics course [17, 18].

Robustness of the CRP point-of-care tests is now firmly established with studies showing reliability and accuracy of test results obtained from point-of-care devices when compared to laboratory standards [19-21].

Diagnostic studies supporting its role as an additional diagnostic marker in LRTI gradually also emerged [3, 22, 23]. A systematic review of the diagnostic role of CRP in LRTI in primary care showed that CRP was a strong predictor in differentiating pneumonia from acute bronchitis [24].

Several barriers have been mentioned for the implementation of CRP as part of routine diagnostic work-up in LRTI, including the hesitation of FPs to alter existing clinical procedures and the absence of strong randomized evidence that using point-of-care CRP could decrease antibiotics prescribing.

Secondary-care clinicians could argue that an additional diagnostic test should differentiate between bacterial and viral infections. Yet, based on large etiological LRTI cohorts we know that causative organisms can only be found in the minority of RTI cases in primary care [2, 3].

So although this aim holds for targeting appropriate antibiotics treatment in secondary care, a diagnostic test in primary care should not necessarily differentiate between bacterial and viral origin of the RTI.

The ultimate aim of such a test would be to assist FPs to differentiate serious from self-limiting infections and, as a result, assist them in withholding antibiotics in the group of patients with the latter.

Two trials investigating the effect of CRP point-of-care testing in primary care were recently performed in the Netherlands. The first involved 40 FPs and 431 LRTI patients [25].

Both interventions showed a statistically significant effect on antibiotics prescribing at any point during the 28-day follow-up. Clinicians in the combined-intervention group prescribed antibiotics to only 23 % of patients, while the usual-care FPs did so in 68 %.

Crucially, patients’ recovery, satisfaction with care and enablement were similar in all study groups. The interventions proved cost-effective [26].

Recovery was similar across groups. Satisfaction with care was higher in patients managed with CRP assistance (p<0.05).

The major contribution of CRP point-of-care testing seems to be in decreasing physician uncertainty. In particular, a CRP test result adds useful information that helps identifying those patients not at risk of a complicated illness course. We observed the greatest antibiotics reduction in patients with CRP under 20 mg/L.

This is clinically relevant, as most patients consulting in primary care will have CRP values less than 20 mg/L. Therefore, most can be gained in this specific group when withholding antibiotics treatment in those patients with CRP under 20 mg/L, albeit while considering the full clinical presentation and illness duration.

Other studies have found similar opportunities for restrictive prescribing in this group with low CRP values [30, 31].

Hence, the greatest value of CRP point-of-care testing lies in ruling out serious disease, which is a key task of FPs on a daily basis.

This brings us to a crucial role of CRP testing in primary care; the test needs to differentiate serious from self-limiting illness. This is how FPs succeeded in decreasing antibiotics prescribing. A CRP test cannot be used as a stand-alone diagnostic test for pneumonia [24].

CRP, as all other biochemical tests, should always be used within the clinical context of the particular patient. We know that individual signs and symptoms have poor operating characteristics as diagnostic tests, but in combination they are much more useful [32].

Body temperature, for instance, has poor operating characteristics as a stand-alone diagnostic test for pneumonia, but clinicians always include a consideration of temperature in the overall assessment of LRTI patients as it provides additional information.

The indications for CRP testing would be as an aid to identify patients with antibiotics-responsive serious illness and subsequently to withhold antibiotics in the large remaining group of patients with self-limiting illness. So in a way CRP in RTI is as much a prognostic marker, as it is a diagnostic marker.

Additionally, CRP point-of-care testing had a role in convincing patients to accept a non-antibiotics management strategy. This was an often-mentioned advantage of CRP by FPs with experience of using the test, thereby also impacting the illness perspective of the patient [5].

Just as much as patient satisfaction with care is linked to physical examination [33], the same may apply for CRP in relation to reassurance. When investigating CRP as an additional test on top of routine consultations, those patients managed with CRP were more satisfied with the consultation compared to those managed without the test, albeit all patients showing relatively high overall satisfaction with care [29].

Additionally, CRP point-of-care testing had a role in convincing patients to accept a non-antibiotics management strategy. This was an often-mentioned advantage of CRP by FPs with experience of using the test, thereby also impacting the illness perspective of the patient [5].

Just as much as patient satisfaction with care is linked to physical examination [33], the same may apply for CRP in relation to reassurance. When investigating CRP as an additional test on top of routine consultations, those patients managed with CRP were more satisfied with the consultation compared to those managed without the test, albeit all patients showing relatively high overall satisfaction with care [29].

Based on the experiences in trials and daily practice the use of cut-off values in Table I can be recommended.

TABLE I: Recommendations based on CRP* levels

These intermediately elevated test results proved difficult for FPs, and their occurrence was independently associated with patient-initiated re-consultation. This association was not found when those test results were recommended to be followed by a delayed prescription. Strikingly, only the minority of patients managed with CRP filled their delayed prescription, versus the majority in the control group.

Besides the fact that the delayed prescriptions in the CRP group were better targeted at intermediately elevated results, this interesting difference can also be explained by the reassuring role of CRP and the explanation of the FP why a delayed prescription is handed out for that specific clinical presentation with associated CRP level.

COMPARISON WITH OTHER BIOMARKERS

Other potential biomarkers to differentiate serious from self-limiting infection, such as procalcitonin and lipopolysaccharide-binding protein, have somewhat less diagnostic accuracies in LRTI in primary care [34, 35].

For the former there is also evidence that it can reduce antibiotics prescribing, yet it is currently not available as a point-of-care test for primary care, and costs are considerable [36].

The use is illustrated in Fig. 1. 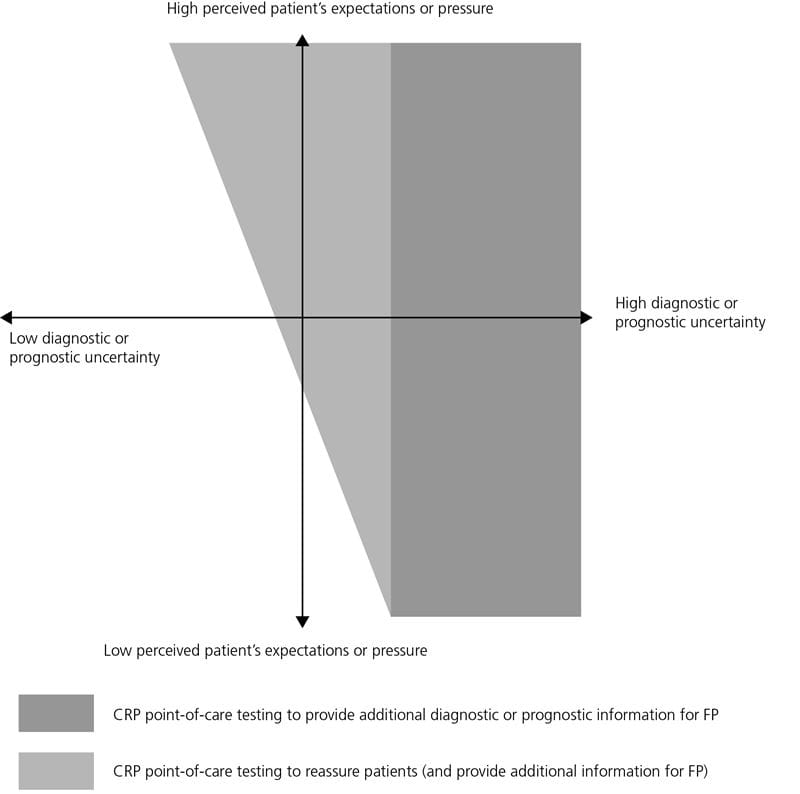 FIG. 1: Use of CRP in RTI patients