The growing role of cardiac markers has been elucidated in patients with acute coronary syndrome, heart failure and other cardiovascular diseases.

An abrupt rupture or erosion of the vulnerable plaque with complete occlusion of blood flow by a so-called red thrombus results in ST-elevation myocardial infarction (STEMI). Less obstructive thrombi and those that are constituted by less robust fibrin formation and a greater proportion of platelets aggregates, so-called white thrombus, result in non-ST-elevation myocardial infarction (NSTEMI) (Fig. 1).

It is noticeable that the therapeutic algorithm does differ for these two different spectrums. 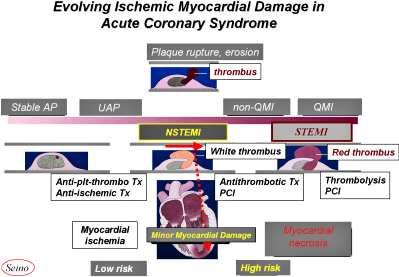 FIGURE 1: Evolving Ischemic Myocardial Damage in ACS - In case of an abrupt rupture or erosion of such vulnerable plaque, complete occlusion of blood flow by red thrombus results in STEMI, and less obstructive thrombi and those that are constituted by less robust fibrin formation and a greater proportion of platelets aggregates, namely white thrombus produce NSTEMI. It is also noticeable that the therapeutic algorithm does differ for the two pathophysiologies.

The growing role of cardiac markers has been elucidated in patients with acute coronary syndrome, heart failure and other cardiovascular diseases.

At present, these three groups of cardiac biomarkers are applied for detection of myocardial damage and the earlier diagnosis of acute coronary syndrome.

In 2007, myocardial infarction was completely redefined based on clinical presentation, ECG findings and the elevation of cardiac troponin (using a troponin assay with an acceptable imprecision) instead of conventional CKMB measurements [6].

We developed a whole-blood rapid strip test for H-FABP and demonstrated the clinical utility for earlier diagnosis of myocardial infarction [3]. The diagnostic sensitivity and negative predictive value of the rapid H-FABP test were superior compared with those of a rapid TnT test, especially in the earlier-acute phase within 2 to 3 hour of onset of symptoms [3].

IMPORTANCE OF BNP OR NT-proBNP MEASUREMENT IN ACS

Large-scale clinical trials have demonstrated that BNP and NT-proBNP are increased in the early stage in acute coronary syndrome and can be used as powerful predictors of short- and long-term mortality. We have revealed different profiles of BNP (NT-proBNP) elevations between STEMI and NSTEMI [8].

Data from FRISC trial [8] and also a substudy of PRISM [9] showed that NT-proBNP levels are highest on admission, within 24 hours of onset, decreased markedly the first 24 hours and then gradually over the following 6 months.

Interestingly, the predictive ability of NT-proBNP appears to increase with time, suggesting that persistent elevation is a particularly strong marker of adverse outcome. A second BNP or NT-proBNP value at 72 hours following the admission appeared to improve risk prediction concerning the end-point of death or recurrent MI at 30 days.

Progressive deterioration of ventricular function is common in patients with severe chronic heart failure. We reported that detection of cardiac troponin T in blood identifies heart failure patients who are at increased risk of cardiac events [10].

Further, we have revealed that H-FABP, which is abundant in the cytosol of cardiomyocytes and, as described above, a sensitive marker of myocardial infarction, increased to a greater extent than TnT levels in heart failure patients who have ongoing myocardial damage [11].

Significant correlations were found between H-FABP levels and plasma levels of BNP and norepinephrine. Patients with ongoing myocardial damage (TnT ≥ 0.02 ng/mL or H-FABP ≥ 4.7 ng/mL) were independently associated with subsequent cardiac events (deaths or readmissions because of worsening heart failure) (Fig. 3) [11]. 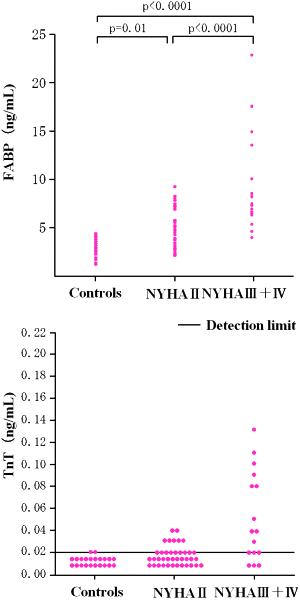 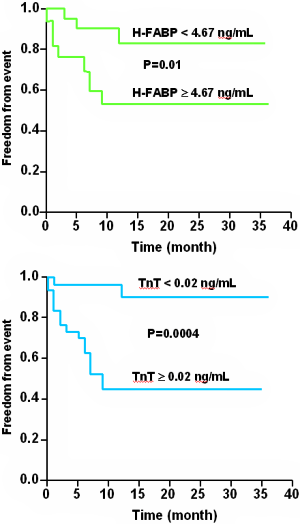 H-FABP and TnT are markers of ongoing myocardial damage and are associated with subsequent cardiac events in patients with chronic heart failure [10, 11].

Troponin Testing and the Tyranny of Distance

Chest pain is a frequent cause of hospitalization and comprises a significant proportion of the...

Troponin Testing and the Tyranny of Distance

Chest pain is a frequent cause of hospitalization and comprises a significant proportion of the...
All articles