Fetal-to-neonatal transition: What is normal and what is not? Part 1

Part 1: The physiology of transition

The transition from fetus to neonate is a critical time of physiological adaptation. While the majority of term infants complete this process in a smooth and organized fashion, some infants experience a delay in transition or exhibit symptoms of underlying disease.

Careful assessment and astute care is needed during the period of transition to ensure that the neonate who is experiencing problems with transition is recognized and appropriate interventions initiated.

Part 1 of this paper examines the physiology of transition, focusing on the changes occurring in the cardiovascular and respiratory systems. Part 2 will address the signs and symptoms which indicate the need for further evaluation of the infant.

The transition from fetal to neonatal life requires complex physiological changes that must occur in a relatively short period of time.

The fetus must move from reliance on the maternal heart, lungs, metabolic and thermal systems to being able to self-sufficiently deliver oxygenated blood to the tissues and regulate various body processes.

While the majority of critical transitions occur in the first few moments after birth, circulatory and pulmonary changes continue for up to 6 weeks after birth. Transition is a time of significant risk to the newborn and necessitates astute observations on the part of the healthcare team.

While most term infants achieve physiological homeostasis without difficulty, careful assessment during this period of adaptation is required to ensure that the infant makes the transition smoothly and without compromise.

Prompt recognition of those infants who present with signs of serious illness enables caregivers to initiate treatment aimed at minimizing the effects of such illness.

This article will review the physiological adaptations occurring during the transition from fetal to neonatal life and will examine common red flags which may alert care providers to an infant experiencing delayed transition or an underlying disease process, congenital abnormality or birth injury.

To fully appreciate the hemodynamic changes which occur after birth, a review of fetal circulation is necessary (Fig. 1). 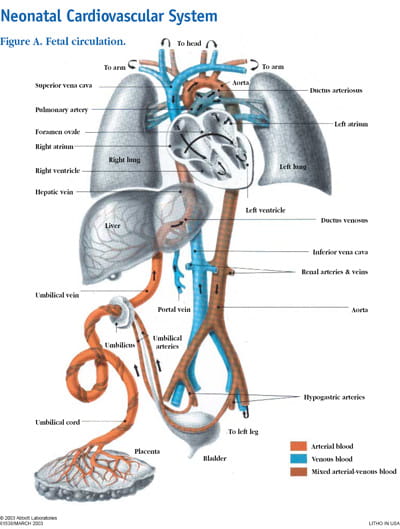 In utero, oxygenated blood is delivered from the placenta to the fetus through the umbilical vein and into the liver.

Some of this blood perfuses the liver, while the rest of the blood bypasses the hepatic system through the first fetal shunt, the ductus venosus, which forms a connection between the umbilical vein and the inferior vena cava (IVC).

The percentage of blood directed towards the liver increases with increasing gestational age with about 80 % entering the liver by 32 weeks' gestation [3,14,15].

When the stream of oxygenated blood enters the right atrium, about 50-60 % is directed through the foramen ovale to the left atrium by the Eustatian valve (a flap of tissue at the IVC right-atrium junction) [5].

The foramen ovale is also a flaplike structure between the right and left atria that acts like a one-way valve. Blood flows across the foramen ovale because high pulmonary vascular resistance maintains pressure in the right atrium at a level greater than that of the left atrium.

This blood enters the right ventricle and pulmonary artery where, again, increased resistance in the pulmonary vessels causes 90 % of this blood to be shunted across the ductus arteriosus and into the aorta. This mixture of oxygenated and deoxygenated blood continues through the descending aorta and eventually drains back to the placenta through the umbilical arteries.

The remaining 10 % the blood coming from the right ventricle perfuses the lung tissue to meet metabolic needs. The blood that actually reaches the lungs represents about 8 % of the fetal cardiac output [10,4]. After 30 weeks of gestation the amount of blood perfusing the lungs gradually increases in preparation for birth [5].

During fetal life, the placenta is an organ of low vascular resistance. Clamping the umbilical cord at birth eliminates the placenta as a reservoir for blood, causing a rise in blood pressure and SVR.

After closure, blood is directed from the right atrium to the right ventricle and on to the lungs rather than through the foramen ovale.

In utero, patency of the ductus arteriosus is maintained by high levels of prostaglandins and the low fetal pO2. Prostaglandins are secreted by the placenta and metabolized in the lungs.

Smaller volumes of blood passing through the fetal lungs result in elevated circulating prostaglandin levels which fall after birth as more blood flows to the lungs [5]. The major contributing factor to closure of the ductus arteriosus is sensitivity to rising arterial oxygen concentrations in the blood [6]. As the pO2(aB) level increases after birth, the ductus arteriosus begins to constrict.

Constriction of the ductus arteriosus is a gradual process, permitting bidirectional shunting of blood after birth. PVR may be higher than the SVR, allowing some degree of right-to-left shunting, until the SVR rises above PVR and blood flow is directed left to right.

Most neonates have a patent ductus arteriosus in the first 8 hours of life with spontaneous closure occurring in 42 % at 24 hours of age, in 90 % at 48 hours of age and in almost all infants at 96 hours [9,12].

Permanent anatomic closure of the ductus arteriosus occurs within 3 weeks to 3 months after birth.

Prior to birth the pulmonary blood vessels have a thick layer of smooth muscle, which plays a key role in pulmonary vasoconstriction. After birth this muscle layer becomes less sensitive to changes in oxygenation and begins to thin, a process which continues for 6-8 weeks [17].

Any clinical situation that causes hypoxia, with pulmonary vasoconstriction and subsequent increased PVR, potentiates right-to-left shunting across the ductus arteriosus and foramen ovale [18].

When the umbilical cord is clamped, blood flow through the umbilical vein to the ductus venosus ceases. Systemic venous blood flow is then directed through the portal system for hepatic circulation. Umbilical vessels constrict, with functional closure occurring immediately. Fibrous infiltration leads to anatomic closure in the first week of life in term infants [1].

At birth the clamping of the umbilical cord signals the end of the flow of oxygenated blood from the placenta. To establish effective ventilation and tissue oxygenation, the neonate must clear the lungs of fetal lung fluid, establish a regular pattern of breathing and match pulmonary perfusion to ventilation.

In utero, the lung epithelium secretes fluid, a process which is essential to the normal growth and development of the alveoli [22]. Toward the end of gestation, the production of lung fluid gradually diminishes and absorption of fluid begins.

A complete understanding of this process is still lacking but some theories have emerged from work on fetal lambs suggesting that sodium reabsorption plays a key role [11].

The catecholamine surge that occurs just before the onset of labor has also been shown to correspond to a more rapid drop in fetal lung fluid levels [16,19]. Those infants who do not experience labor, such as those born by elective cesarean section, are more likely to have residual fluid in the lungs and develop Transient Tachypnea of the Newborn (TTN) because of lower levels of serum catecholamine [11].

Initiation of breathing is a complex process that involves the interplay of biochemical, neural and mechanical factors, some of which have yet to be clearly identified [1].

A number of factors have been implicated in the initiation of postnatal breathing: decreased oxygen concentration, increased carbon dioxide concentration and a decrease in pH, all of which may stimulate fetal aortic and carotid chemoreceptors, triggering the respiratory center in the medulla to initiate respiration.

Some researchers have questioned the influence of these factors and suggest instead that factors secreted by the placenta may inhibit breathing, and that regular breathing is initiated with the clamping of the cord [1].

Mechanical compression of the chest creates negative pressure and drawing air into the lungs as the lungs re-expand. Further expansion and distribution of air throughout the alveoli occur when the newborn cries.

The core temperature of the fetus is typically about 0.5 °C above that of the mother and therefore the fetus expends no energy staying warm [20].

After birth the newborn’s ability to maintain temperature control is determined both by environmental factors and internal physiological processes. Newborns are predisposed to heat loss because of factors such as: a large surface area in relation to body weight, limited body fat and a decreased ability to shiver [2].

Maternal glucose readily crosses the placenta and, under normal circumstances, supplies the fetus with enough energy to grow appropriately and to store glycogen in the liver for use after birth.

The release of catecholamines occurring during labor and birth mobilizes glycogen; however, blood glucose levels decline after birth, reaching their lowest point at 1 hour of age [21].

Much of the work of transition is accomplished in the first 4-6 hours following delivery, while final completion of the cardiovascular changes may take up to 6 weeks [5].

During the initial hours after birth, the majority of fetal lung fluid is reabsorbed, a normal functional residual capacity is established in the lungs and the cardiovascular system redistributes blood flow to the lungs and tissues. The infant moves through a fairly predicable series of events mediated by the sympathetic nervous system that results in changes in heart rate, respirations, gastrointestinal function and body temperature.

In a classic description still used today, Desmond and colleagues [7] organized these changes into three stages:

Residual symptoms of transition such as crackles in the lungs, a soft cardiac murmur and acrocyanosis may persist for periods of up to 24 hours in otherwise healthy infants [8].

The majority of newborns complete the process of transition with little or no delay. These infants may demonstrate normal transitional findings, including tachypnea and tachycardia, a soft heart murmur and fine crackles in the lungs as well as acrocyanosis for varying lengths of time after birth.

Prolonged or exaggerated signs of distress should lead the healthcare provider to carry out a thorough physical examination and review of the maternal and newborn history to establish the etiology of the symptoms.

This will allow the rapid initiation of appropriate interventions aimed at minimizing the morbidity resulting from problems of transition or underlying diseases processes. Part 2 of this series will examine signs and symptoms that may assist the healthcare team identify the infant in need of further evaluation during the period of transition.

Part 2: Red flags The transition from fetus to newborn is a process of rapid physiological...

Reprinted with permission from Elsevier from "Neonate capillary blood gas reference values", by...

Part 2: Red flags The transition from fetus to newborn is a process of rapid physiological...

Reprinted with permission from Elsevier from "Neonate capillary blood gas reference values", by...
All articles