Point-of-care cardiac markers in the Emergency Department are safe, reduce admissions and do not impact on the 4-hour target

The age range was 16-96 and 54 % patients were male. 649 patients were discharged from the ED (63 %). However, with high-risk patients and those admitted for other reasons, this percentage rises to 83 % (649 discharges from 784 appropriate POC patients).

The pilot work suggests that POC cardiac markers can facilitate discharge of low-risk patients from the ED without a significant re-attendance rate or impacting on the 4-hour access standard.

Chest pain is responsible for approximately a quarter of emergency hospital admissions [1]. The main diagnostic concern is acute myocardial infarction – current recommendations are that a troponin sample is taken 12 hours after the onset of symptoms or “time of worst pain”.

This means that many patients are admitted from Emergency Departments (ED) to medical admissions units for a 12-hour troponin which leads to increased health service costs and inconvenience for the patient.

Recently there has been interest in point-of-care cardiac biomarker testing. The Randomised Assessment of Treatment using Panel Assay of Cardiac markers (RATPAC) trial [2] investigated whether patients with chest pain could be safely discharged from the ED after serial biomarkers at baseline and 90 minutes.

Barnsley Hospital NHS Foundation Trust is a district general hospital in the UK with an annual ED attendance of approximately 80,000 patients. After experience of point-of-care cardiac biomarkers whilst recruiting patients into the RATPAC study, it was decided to initiate a pathway for low-risk chest pain (see Flowchart for POC pathway). 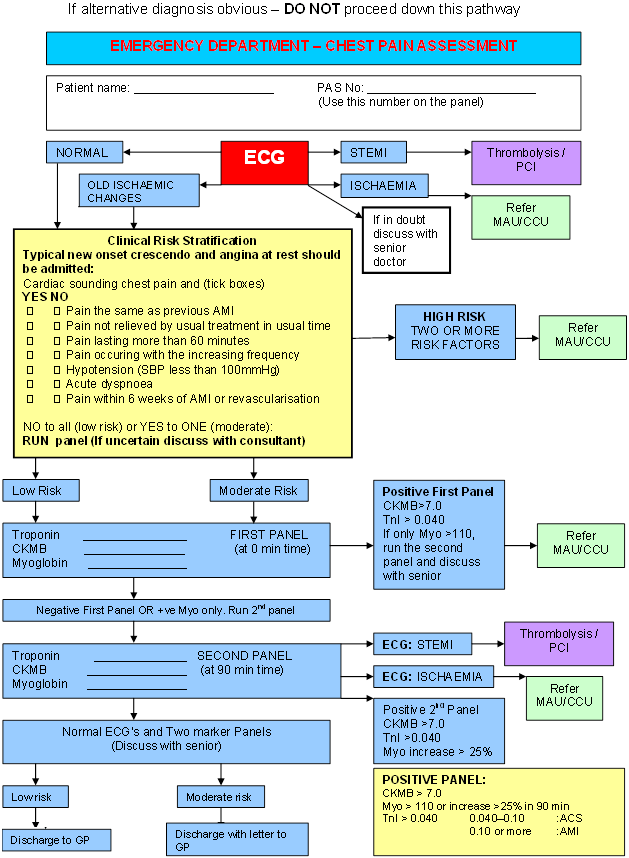 A preceding audit looking at patients with chest pain suggested that up to half of those admitted to the Acute Medical Unit (AMU) would be suitable for discharge via the point-of-care pathway. Low-risk patients underwent POC cardiac marker panel at zero and 90 minutes.

Cut-off levels were agreed with our Clinical Biochemist prior to the pathway being instigated.

POC TESTING IN THE ED

Patients who underwent POC testing from December 2011 until July 2012 were identified using the POC analyzer database. Patient notes were then examined and total time in the ED assessed using the ED tracking system.

Of particular interest was which risk category the patient fell into (low, medium, high); whether they were admitted or discharged from the ED; whether they re-attended within a month (particularly if they were re-admitted with major adverse cardiac event) and if they breached the 4-hour access standard.

A total of 1039 patients underwent POC testing during the period. Of these, nine sets of notes were missing, giving a sample of 1030 patients.

However, when high-risk patients and those admitted for other reasons (different diagnosis or social reasons), this percentage rises to 83 % (649 discharges from 784 appropriate POC patients – Fig. 2). 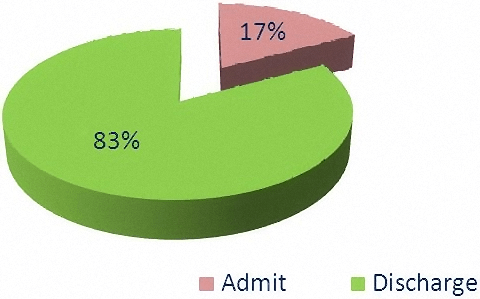 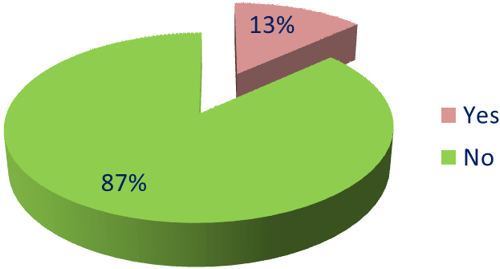 These can be classified as unrelated (e.g. ankle injury), related but not significant (chest pain but negative POC/discharged from ED) and significant (ECG changes, elevated cardiac markers, admitted from ED). 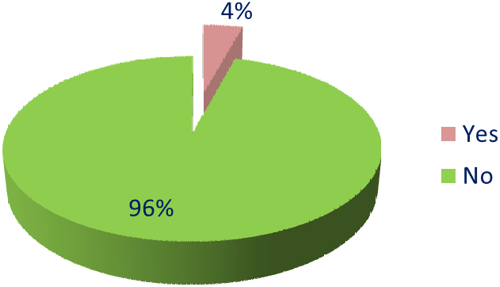 There were a total of 120 patients (11.6 %) who breached the 4-hour access standard. Of these, 65 patients were discharged from the ED following two negative cardiac marker panels.

The other 55 patients were admitted and may have breached due to bed waits or ED overcrowding (Fig. 5).

During the 8-month period, there were a total of 2147 breaches and the average 4-hour performance for the trust was 95.65 %. Point-of-care patients were responsible for just 2 % of all breaches during that time period.

For the same period in the previous year, there were 2779 breaches and the average 4-hour performance was 94.27 %

Use of POC cardiac markers has been examined recently. Two Australian papers found that use of POC reduced ED length of stay [4,5] and this was supported by a US study [6].

However, other papers have found that the effect of point-of-care testing on ED length of stay varies between settings [7].

It is important that an appropriate clinical assessment takes place before deciding which patients are suitable for POC testing (i.e. low-risk chest pain). Suitable clinical decision rules may include the HEART score [8] or the Manchester Acute Coronary Syndromes (MACS) decision rule [9].

In our group, we had a major adverse clinical event rate of 4 % – which is higher than in other studies: 3 % in the RATPAC trial and 0.9 % in the ASPECT trial. As a result of monitoring POC patients, it was decided to reduce the troponin cut-off from 40 ng/L to 23 ng/L after discussion with the clinical biochemistry team and expert advice from the POC analyzer company.

We are currently re-auditing the POC pathway to see if this reduction in troponin cut-off has decreased the MACE rate without significantly increasing the admission rate.

In our single-center, small pilot study, the introduction of a point-of-care cardiac marker pathway for low-risk cardiac chest pain is safe, reduces admissions to hospital and does not impact on the 4-hour target.

Reducing admissions frees up beds and helps to promote patient flow through the department. Although the MACE rate of 4 % was slightly higher than other studies, it is not felt that this was of significant concern and that the pathway remains safe.

However, we have decided to reduce the troponin cut-off and are currently examining how that has impacted on the pathway.

Finally, despite the requirement for patients to have two separate blood tests 90 minutes apart, patients that breached the 4-hour access standard only accounted for 2 % of all breaches during that time.

Further work in this area needs to be carried out to support our findings.

POCT in the ED - relevant clinical and economical advantages

In the ED, 25 % of patients with angina pectoris with suspected AMI are wrongly diagnosed (no...

POCT in the ED - relevant clinical and economical advantages

In the ED, 25 % of patients with angina pectoris with suspected AMI are wrongly diagnosed (no...