Summary The diagnosis of pulmonary embolism is challenging due to the non-specificity of signs and symptoms and the very busy Emergency Departments to which the overall majority of patients with suspected PE present. While several well-validated diagnostic algorithms exist and are readily available, it is known that in many hospitals either these algorithms are not used correctly or not used at all.

It has been demonstrated that this diagnostic mismanagement will lead to more complications during follow-up. Therefore the key issue is to provide the busy clinician with a simplified diagnostic algorithm that safely and efficiently guides the patient towards a definitive diagnosis. The YEARS algorithm has been demonstrated to fulfil many of these requirements and is ready for implementation into clinical practice in every hospital where computed tomography pulmonary angiography is available.

Pulmonary embolism (PE) is defined as an obstruction of a pulmonary artery caused by a thrombotic embolus and was first described by Virchow in 1846 [1]. PE shares many characteristics of epidemiology and pathophysiology with deep vein thrombosis (DVT) and they are generally considered as two different presentations of the same disease called venous thromboembolism (VTE). With an annual rate of 1-2 per 1000 patients, PE is a relatively common disease [2, 3]. A rapid diagnosis and accurate treatment is essential, since PE can be a fatal disease.

The diagnostic management of suspected acute PE is often challenging due to the non-specific and highly variable signs and symptoms. As a consequence, once the diagnosis is clinically considered, this has to be subsequently confirmed by a reliable objective test, which is computed tomography pulmonary angiography (CTPA) as a first-line test [4].

Over the years, however, the increasing use of CTPA in busy Emergency Departments has led to a very considerable lowering of the prevalence of PE to be lower than 10 % in patients presenting to Emergency Departments in the USA [5]. Moreover, even when PE is demonstrated, the increase of PE limited to the subsegmental level has led to doubt of the clinical relevance to treat these small clots with potentially dangerous anticoagulant treatment.

The key issue in the diagnostic work-up of patients with clinically suspected PE is thus to accurately and rapidly distinguish the patients with PE who need anticoagulant treatment from those who do not need treatment [6, 7].

In view of the above, many efforts have been made to exclude PE without the use of CTPA, since unrestricted use of CTPA is associated with several disadvantages, e.g. radiation exposure, complications related to the administration of intravenous contrast and high healthcare costs.

The typical clinical presence of acute PE includes a patient with a sudden onset of dyspnea and pleuritic chest pain upon breathing, while blood coughing (hemoptysis), signs suggestive of deep vein thrombosis (DVT) and even collapse are less prevalent symptoms [8].

Importantly, these symptoms are not unique for PE and may also represent other acute cardiopulmonary diseases, including pneumonia, pneumothorax and myocardial ischemia. In diagnostic studies, traditionally, one in three to one in ten patients with a clinical suspicion of PE have the disease [7, 9]. To demonstrate PE radiological imaging is essential, which is foremost computed tomography pulmonary angiography (CTPA). This test, although readily available, is associated with high healthcare costs, radiation exposure and a risk of complications such as contrast-induced nephropathy and allergic reactions [10].

Therefore, over the past 20 years, diagnostic management algorithms have been developed, aiming to safely exclude PE without need in all patients for an imaging test. These algorithms typically contain a validated clinical probability or decision rule (CDR), which predicts the chance that PE is present, a quantitative D-dimer blood test and an imaging test, i.e. CTPA or ventilation-perfusion lung scan (V/Q lung scan).

Various CDRs have been developed in clinical practice. The Wells rule and revised Geneva score are the most widely used for PE [10]. The CDRs are used to divide patients into two groups, either ”PE unlikely” or ”PE likely”, with the first group having a PE prevalence of typically around 10 % and the PE likely 20 % or more [10]. The rules perform equally well and the choice of which rule is used may depend on local preference [10].

D-dimer is a split product of fibrin, induced by naturally occurring fibrinolysis, after fibrin is formed in a thrombus, and D-dimer concentration is therefore a marker of fibrinolysis. D-dimer is very sensitive to the presence of a thrombosis but can also be elevated in the presence of many other clinical conditions, including infection, after operation, trauma and pregnancy. The sensitivity of D-dimer testing of quantitative assays is very high (95-100 %), whereas the specificity is moderate (43-93 %) [11].

Using the standard cut-off value of <500 μg/L, the negative predictive value of D-dimer testing allows for the exclusion of PE in patients with a CDR indication of unlikely clinical probability [7, 9]. By applying this strategy, PE can be ruled out in 25-46 % of patients without the need for an imaging test, with a 3-month VTE incidence of ~0.5 % [18].

In an attempt to increase the number of patients in whom PE can be ruled out without imaging tests, above the age of 50 years, an age-dependent D-dimer cut-off level has been evaluated: ”age × 10 μg/L in patients over 50 years of age”. In the so-called Adjust study the safety of applying this age-dependent D-dimer cut-off has been demonstrated [12].

The 3-month VTE incidence in patients in the PE unlikely category, who presented with a D-dimer level of >500 μg/L but below the age-adjusted threshold, was 0.3 % [95 % confidence interval (CI) 0.1-1.7]. The main gain was an absolute decrease in need for CTPA imaging of 12 % without compromising safety (i.e. too many VTE recurrences at follow-up). For clinical practice, it could mean that elderly patients, of whom some may live in nursing homes, can be managed with decision rules and D-dimer tests and do not have to come to the hospital for imaging tests, although this approach still awaits official validation.

Traditionally, the reference imaging test for diagnosing PE is pulmonary angiography, in which a normal result yields a 3-month VTE incidence of 1.7 % (95 % CI 1.0-2.7) [13]. Although the recurrence rate of VTE after a normal perfusion lung scan is even lower than that of pulmonary angiography with 0.9 % (upper limit of 95 % CI 2.3), V/Q lung scan is no diagnostic in up to 40 % of patients, in whom the PE prevalence is still ~20 % and who thus would require additional imaging [10].

Over the past 10-20 years CTPA has replaced V/Q lung scan as the first-line test. Importantly, CTPA results in an inconclusive test result in only 0.9-4.6 % of patients [10]. The sensitivity of multi-detector row high-resolution CTPA is excellent. In a meta-analysis, the pooled 3-month VTE incidence after a normal CTPA alone in patients in whom CTPA was indicated based on a validated CDR and/or D-dimer test was 1.2 % (95 % CI 0.8-1.8), compared to 1.1 % (95 % CI 0.6-2.0) after normal CTPA and subsequently normal leg compression ultrasonography, indicating that the safety could not be further improved by excluding (a) symptomatic DVT after normal CTPA [14].

Integrating different parts towards a diagnostic algorithm for PE

In patients who present with suspected PE, diagnostic management is started with assessing the clinical probability of PE, using one of the validated CDRs. In patients with a CDR indicating that PE is unlikely to be present, a validated quantitative D-dimer test is performed. PE is ruled out – without further imaging test – if the D-dimer level is <500 μg/L or below the age-adjusted threshold for patients over the age of 50 years (e.g. for a 62-year-old patient the cut-off level would be 620 μg/L.

In patients with either a CDR indicating that PE is unlikely to be present, score in combination with an elevated D-dimer level, or a CDR indicating that PE is likely to be present, CTPA is indicated to determine whether PE is present (Fig. 1). With these algorithms PE can be safely excluded – see above – but it is essential that the algorithms are correctly used. This is underlined by several recent studies showing that a validated diagnostic algorithm is frequently not or incorrectly applied.

This may lead to the unnecessary use of CTPA and, even more relevant, to a much higher 3-month VTE incidence in patients in whom anticoagulant therapy is withheld [15] than when the algorithm is followed properly. In order to improve adherence a hand-held computerized clinical decision support has been successfully evaluated and led to less incomplete diagnostic pathways [16].

In order to comply with the current hurdles of following diagnostic algorithms, we retrospectively analyzed a very large database of patients with suspected PE based on our prior studies and choose three items of the original Wells clinical decision rule and called them YEARS items – clinical signs of deep vein thrombosis,  hemoptysis, and whether pulmonary embolism is the most likely diagnosis – as most predictive for pulmonary embolism [17].

Importantly, one of our main goals was to make the YEARS algorithm suitable for a more easy application in busy Emergency Departments, to which nearly 90 % of patients with suspected PE present, without compromising safety. A very important second objective was to further decrease the number of necessary CTPA examinations in patients of all ages. 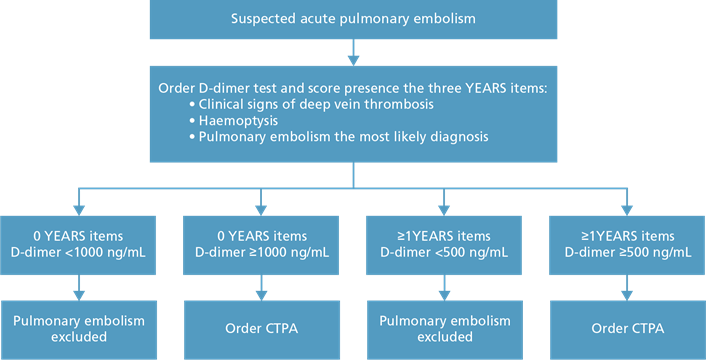 This low number of recurrences compares very favorably with figures from the literature, where in a meta-analysis 1.1 % recurrent VTE was observed. CTPA was not indicated in 1651 (48 %) patients with the YEARS algorithm compared with 1174 (34 %) patients, if the Wells rule and fixed D-dimer threshold of less than 500 μg/L would have been applied, a difference of 14 % (95 % CI 12-16).

The comment indicated that there is still unanswered questions of the use of the YEARS algorithm in pregnant patients – now a study is being conducted in them – as well as patients with cancer and suspected PE, a study which is currently being planned [19]. A recent post hoc analysis has yielded that the gain in time to diagnosis is almost an hour for a patient presenting to the Emergency Department [20].

Applying validated diagnostic algorithms in patients with suspected PE is essential, in order to reduce the need for diagnostic imaging and at the same time keep complications, as a result of mismanagement in diagnosis, at low level. The YEARS diagnostic algorithm is a very simple and efficient way to safely exclude PE.

The absolute 14 % decrease of CTPA examinations for all ages and across several relevant subgroups – e.g. women of fertile age as well as older patients, is an additional and not negligible important aspect of this study, as is the almost one hour gain in time to diagnosis compared to traditional diagnostic algorithms for suspected PE.

POCT in emergency rooms: One key factor for process streamlining with Lean Management

In the past years, emergency rooms (ER) all over Germany, especially those of maximum-care...

POCT in emergency rooms: One key factor for process streamlining with Lean Management

In the past years, emergency rooms (ER) all over Germany, especially those of maximum-care...

Emergency Department (ED) overcrowding is becoming an increasingly international issue.  Although...
All articles