John Severinghaus, who recently turned 80, is one of the pioneers in the field of blood gas. To celebrate his birthday, bloodgas.org has asked him to look back on the first developments leading to the modern blood gas analyzers. The following article has also been published in Anesthesiology, The Journal of the American Society of Anesthesiologists, Inc.

In 1953, the doctor draft interrupted Dr Severinghaus' anesthesia and physiology training and sent him to the National Institutes of Health as director of anesthesia research at the newly opened Clinical Center. He developed precise laboratory partial pressure of carbon dioxide (pCO2) and pH analysis to investigate lung blood gas exchange during hypothermia.

Constants for carbon dioxide solubility and pK' were more accurately determined. In August 1954, he heard Richard Stow describe invention of a carbon dioxide electrode and immediately built one, improved its stability, and tested its response characteristics.

In April 1956, he also heard Leland Clark reveal his invention of an oxygen electrode. Dr Severinghaus obtained one and constructed a stirred cuvette in which blood partial pressure of oxygen (pO2) could be accurately measured.

Dr. Severinghaus collaborated with Astrup and other Danes on the Haldane and Bohr effects and their concepts of base excess during two sabbaticals in Copenhagen.

I HEREIN revisit events and discoveries that led to the first blood gas electrode apparatus.

Hypothermia was then used both in cardiac surgery and in neurosurgery. John Osborn, MD (Department of Medicine, New York University Hospital, New York, New York), had reported that at low temperature, pulmonary excretion of carbon dioxide (CO2) was blocked by some unknown pulmonary defect, resulting in a large gradient or difference between arterial and end-tidal partial pressure of carbon dioxide (pCO2) [1].

Measurement of pCO2 was difficult at that time, but I credit his article for initiating my interest in blood gas analysis. I suspected he had not corrected the laboratory's blood pCO2 values to body temperature. A blood pCO2 reported to be 40 mmHg would have actually been 29 mmHg in a hypothermic patient at 30 °C. If the lung functioned normally, the end-tidal pCO2 would also be 29 mmHg.

Temperature affects two constants in the Henderson-Hasselbalch equation, the apparent carbonic acid dissociation constant pK', and S, the CO2 solubility. The accepted values proved to have errors and needed reanalysis.

This required accurate pH analysis at body temperature and measurement of plasma total CO2 content using a Van Slyke manometric apparatus. It was customary, but insufficient for accurate work, to measure pH at room temperature and correct it to 37 °C. There were no thermostated pH electrodes suitable for blood analysis on the market.

My technician, A. Freeman Bradley, BA (Laboratory Technician, Department of Anesthesia, Clinical Center, National Institutes of Health), and I built an accurately thermostated plastic box around a pH electrode.

With the help of Roger Bates, Ph.D. (Director, Chemical Standards Laboratory, National Bureau of Standards, Washington, DC), we obtained precise pH buffers. We devised a method of separating plasma from blood without loss of CO2 from the plasma surface in the centrifuge.

We determined the variations of pK' with temperature and pH and traced the source of small errors in the standard handbook tables for the variation with temperature of the solubility coefficient of CO2. By 1954, having set up the world's most accurate blood pCO2 analyses (SD, 0.2 mmHg) [2], we confirmed that hypothermia did not block CO2 excretion.

However, measuring pCO2 accurately remained far too laborious to be clinically useful. Many physiologists needed a better way.

He had wrapped a thin rubber membrane wet with distilled water over a homemade combined pH and reference electrode. When he changed gas pCO2 outside the device, the pH inside changed as a log function of gas pCO2. He was unable to get stable readings and said he doubted it could be made useful.

After his talk, I asked him why he didn't try adding sodium bicarbonate to the water film in the electrode. He replied that this would abolish the signal because he thought bicarbonate would buffer the effect of pCO2 on pH. I knew it did not. Stow generously agreed that I would further investigate this idea.

On my first day back at the National Institutes of Health, I confirmed that it would work, using a Beckman bulb-type pH electrode, a chloride-coated silver reference, and a Beckman pH meter.

I tied a piece of lens-cleaning tissue over the pH electrode wet with 0.9 % NaCl containing 25 mM NaHCO3. The bicarbonate not only made the device stable but doubled the pCO2 sensitivity compared with an electrolyte of distilled water. In 1957, Stow et al. [4] published their discovery of the CO2 electrode but took no further interest in this idea.

For blood analysis, we constructed a metal cuvette to hold the electrode components and to permit a sample of approximately 0.2 ml to be injected through tubing while the device was mounted in a water thermostat.

We proceeded to investigate and optimize the electrode design and to test its performance, linearity, drift, and response time. By 1955, the era of Henderson, Hasselbalch and Van Slyke were over for us. We prepared to publish these studies and constructed electrodes for several colleagues but made no attempt at commercial development.

Stow had no interest in a patent, thinking it would distract him from his job, and also because his university only allowed inventors 10 % of royalties. As a US government employee, I was not permitted to patent it, certainly not with a reluctant coinventor.

It was useless above pO2 of 80 mmHg. Polarography had been developed by Jaroslav Heyrovsky, PhD (Professor of Chemistry, Charles University, Prague, Czechoslovakia), for which he received a Nobel prize in 1960.

Dropping mercury polarography had been successfully used by Henry K. Beecher, MD, PhD (Professor and Chairman, Department of Anesthesia, Harvard University, Massachusetts General Hospital, Boston, Massachusetts), in the early 1930s. Polarographic oxygen "availability" (not pO2) was estimated with bare platinum cathodes in nonblood liquids and in brain or other tissues, but the cathode, usually platinum, was poisoned when exposed to blood.

No one had successfully developed an electrochemical blood pO2 analysis.

But to publish in Science, the editor said he needed to measure the emerging blood pO2. Stimulated by that editorial rejection, he considered using a polarographic method. To avoid poisoning of the metal by blood, he covered a bare end of a platinum wire fused into glass with cellophane.

It gave an approximate pO2 signal but consumed so much oxygen that it required rapidly flowing blood, and it could not be accurately calibrated. In 1954, he conceived an electrode with a reference electrode inside under a polyethylene membrane.

He built one within an hour and immediately found that it worked. The polyethylene greatly reduced the oxygen consumption, which proved crucially important for calibration. 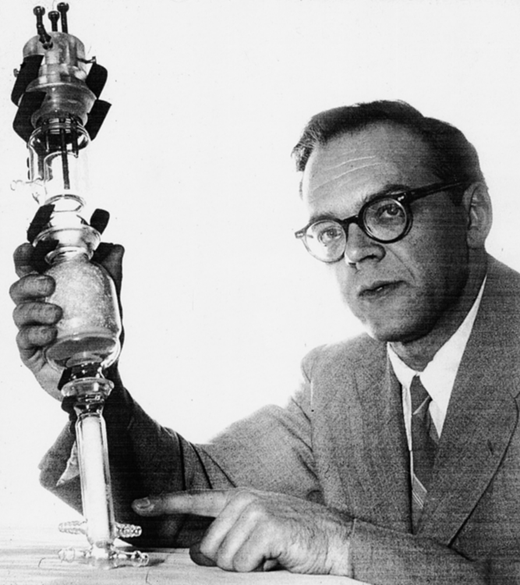 FIG. 1: Leland Clark with his invention of a method of defoaming in a bubble oxygenator (1952)

I had invited a group of respiratory physiologists, including Clark, to an ad hoc meeting to discuss the oxygen problem at the meeting of the Federation of American Societies of Experimental Biology in April 1956 in Atlantic City.

Clark presented his electrode to that small group, for several of whom it was a life-altering experience [5]. We all knew immediately that blood pO2 was now measurable by polarography.


By June 1956, Bradley and I had obtained one of Clark's electrodes made for him by the Yellow Springs Instrument Company (Yellow Springs, Ohio).

Because the platinum cathode was large, the Clark electrode, even when covered with polyethylene, consumed oxygen so fast that to accurately measure blood pO2, the sample had to be rapidly stirred. We constructed a stirred cuvette in a thermostat.

Because blood and gas of the same pO2 still yielded different readings, it had to be calibrated with blood of known pO2, so we added a microtonometer to the water thermostat.

The physiology workshop constructed a thermostat into which I mounted both the Stow-Severinghaus CO2 electrode and the Clark oxygen electrode in a stirred cuvette with a small blood tonometer.

In 1959, after moving from National Institutes of Health to the University of California, San Francisco, Bradley and I added a pH electrode to the blood gas electrode water bath, making the first three-function blood gas apparatus (Fig. 2).

Forrest Bird, PhD, MD (President, Bird Corporation, Palm Springs, California), who manufactured popular positive-pressure ventilators, offered to manufacture the CO2 electrode and to make it commercially available. I asked the company to leave my name off the device.

The result was that I received the only National Welding Company (San Francisco, California) CO2 electrode that did not have my name on it. Shortly thereafter, commercial interest began, and within a few years, devices became available from Beckman Instrument Company (Fullerton, California), Instrumentation Laboratories Inc. (Cambridge, Massachusetts), Radiometer A/S (Copenhagen, Denmark), and many other firms. 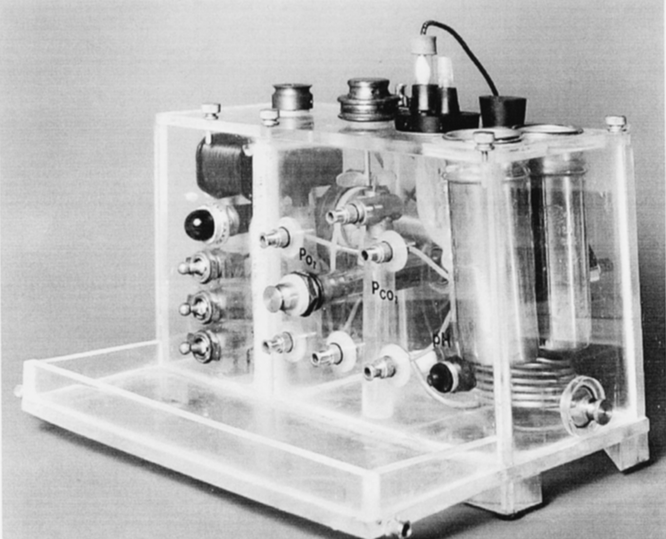 Astrup and origin of base excess

From pH and pCO2, one can then calculate bicarbonate, total CO2, and base excess, a term Astrup and Siggaard Andersen introduced as a quantitative measure of the nonrespiratory or metabolic abnormality in a whole blood sample.

Base excess proved to be the first accurate index of the nonrespiratory component of acid-base balance [8]. Its first application was only for blood, but by 1966, it was shown to apply to the extracellular fluid of the entire body if one assumed an average extracellular fluid hemoglobin concentration of 5 g/dl.

Their work stimulated me to construct a blood gas slide rule to compute base excess and effects of temperature, pH, base excess, and p50on the oxygen dissociation curve (ODC) [9].

The data were simply inadequate. A Danish group and I partitioned the separate pH and pCO2 components of the Bohr effect. To measure the bottom of the ODC precisely, Roughton joined Irving Fatt (Professor of Optics, University of California, Berkeley, California) and associates, devising a method using the Clark electrode.

Roughton, Bradley, and I used a unique method with pO2 measurement at 37 °C and 0 °C to define the upper end [10]. I was then able to tabulate a standard ODC and use the data to modify the Hill equation to describe the human ODC precisely [11].

I interpret the cubic term to result from the affinity increase due to the shape change of the hemoglobin tetramer when the second of four oxygen molecules is bound. Roughton died before this discovery outmoded his labors with the equation of Adair.

During the 1960s, blood gas analysis became almost universally available, helping cardiorespiratory physiology flourish. For several years, our article[6] was among the most quoted articles in biologic literature, and blood gases were called the most important laboratory test for critically ill patients.

In 1986, the pioneer-inventors were honored at the Respiration Dinner of the American Physiological Society annual meeting, and each was presented with named financial awards: the Henderson-Hasselbalch Award to Astrup and Siggaard-Andersen, the Heyrovsky Award to Clark, and the Nernst Award to Richard Stow.

By then, Clark had also invented the lactate and glucose electrodes and was developing a blood substitute fluorocarbon emulsion stable at room temperature. I donated an original blood gas apparatus to the Smithsonian for their exhibit "The Conquest of Pain" in 1985.

Blood gas apparatuses are now automated, expensive, and largely in the hands of the clinical pathologists rather than pulmonologists, anesthesiologists, and critical care physicians.