Sepsis is a major cause of mortality and morbidity for hospitalized patients around the world. Early intervention can reduce mortality and morbidity from severe sepsis, but signs and symptoms of sepsis are non-specific. Point-of-care lactate has proved to be an invaluable tool for some institutions in standardized protocols for early recognition and intervention in sepsis.

In this article I will explain why performing lactate at the point of care has proved advantageous for some institutions, and elaborate on analytical and preanalytical issues related to lactate measurement.

THE PROBLEM OF RECOGNIZING SEPSIS

Sepsis, or whole-body inflammation accompanied by infection, is common among hospitalized patients. Severe sepsis is defined as acute organ dysfunction secondary to infection [1]. Septic shock is defined as severe sepsis that cannot be resuscitated or stabilized by appropriate IV fluids alone [1].

It has been recognized for decades that patients with severe sepsis and/or septic shock are at high risk of death in the hospital. Early intervention (fluid resuscitation, antibiotics, other treatments) can improve mortality from sepsis. However, the primary symptoms of sepsis (fever or hypothermia, decreased blood pressure, increased heart rate, increased or decreased white blood count) are non-specific and therefore present in a wide variety of patients.

Several years ago it was recognized that all the information was generally available to recognize sepsis early in the hospital setting, but the organization of this information and the ability to act upon it were missing in most institutions. For instance, almost all patients have blood pressure, heart rate and temperature recorded at hospital admission. A great many have a complete blood count and other laboratory work performed shortly after arriving in the hospital or emergency department.

However, rapidly collecting this information and “flagging” patients with potential sepsis or severe sepsis has proved to be a difficult task. Therefore the Surviving Sepsis Campaign, an international effort to educate healthcare providers about sepsis and help standardize the approach to early recognition of sepsis, was initiated in order to help improve outcomes of hospitalized patients with sepsis [1].

For an excellent review of early sepsis recognition and resuscitation, see the July 2011 edition of acutecaretesting.org [2].

THE NEED FOR SPEED

The first three steps in the resuscitation bundle are laboratory-dependent processes, and it is important to recognize that the rest of the bundle cannot proceed until the laboratory information is either received (lactate) or collected (blood cultures).

Without adding laboratory information (especially lactate, but also white blood count, arterial blood gas parameters if performed), it is extremely difficult to effectively differentiate patients with severe sepsis or septic shock from patients with other conditions. Thus the laboratory must be a partner in any attempt at a standardized approach to early sepsis recognition.

Within our institution, Mayo Clinic in Rochester, Minnesota, physicians in the intensive care unit (ICU) study compliance with sepsis resuscitation guidelines described above during three periods of time.

Compliance with the first three elements of the resuscitation bundle (the laboratory-dependent processes, starting with obtaining a lactate value and ending with antibiotics administered within 1 hour) increased from 75 to 85 % during Phase I to 91-97 % during Phase III. Even more importantly, ICU mortality decreased during Phase III compared to either Phase I or II [3].

Feedback from the sepsis response team leaders indicated that point-of-care lactate was essential to both early recognition and intervention in sepsis. Rather than sending a lactate level to the central lab and waiting 20-30 minutes to get a result, the sepsis response team remains at the bedside until lactate values and clinical information are integrated (within minutes of suspecting sepsis) to determine whether to pursue further action.

The ability to differentiate patients who potentially have severe sepsis or septic shock rapidly means that all members of the healthcare team (physicians, nurses, respiratory therapists, pharmacists) are still gathered at the patient’s bedside to initiate prompt intervention with fluids, antibiotics and further care as required. This was not possible before point-of-care lactate testing was initiated, because even a 15-20 minute wait for the lactate value meant that the healthcare providers generally went on to other duties and had to be “recalled” to the patient care situation once the lactate was available.

Compliance with the goals for the laboratory-dependent first three steps of the resuscitation bundle was not possible without point-of-care testing. In addition to point-of-care lactate testing, standardized order sets that nurses can initiate and other steps have allowed earlier and more consistent intervention in sepsis than was possible before the sepsis response team was formed. As with all point-of-care testing, unless protocols or care practices are modified to accommodate the rapid information obtained at point of care, the testing is unlikely to be of significant benefit.

CORRELATION BETWEEN POINT-OF-CARE AND LABORATORY LACTATE 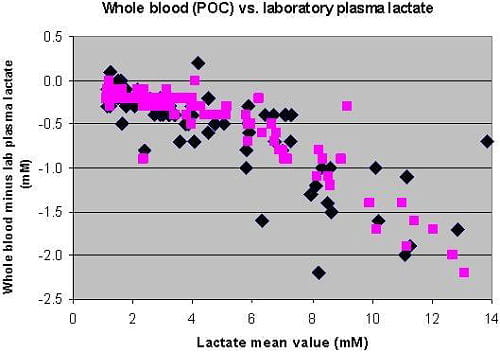 In our institution (and many other) the cut-off for initiating the sepsis resuscitation bundle is 4 mM. There were 50 plasma lactate samples with lactate concentrations ≤ 4 mM. All 50 of those “negative” lactate samples were also ≤ 4 mM by both whole-blood lactate methods. There were 40 plasma samples with lactate concentration > 4 mM, a “positive” sample or one that would trigger initiation of the resuscitation bundle. 36/40 (90 %) and 35/40 (88 %) were also > 4 mM by the whole-blood lactate methods.

OTHER ISSUES WITH LACTATE MEASUREMENT

Preanalytical issues
Other institutions have reported problems with correlation between point-of-care whole-blood lactate and laboratory plasma lactate. This may be because lactate is sensitive to a number of preanalytical variables that can result in falsely elevated results. Lactate in whole blood is not stable. Lactate values can increase 1.5-2.0 mM over as little as 15 minutes in a blood gas syringe at room temperature (unpublished data).

When blood gas syringes are placed on ice, the increase was only ~0.2 mM over 45 minutes (unpublished data). Thus personnel performing point-of-care lactate need to be instructed to test whole-blood specimens within 5 minutes of drawing samples or cool samples with an ice slurry. Prolonged tourniquet time or excessive fist clenching during blood draw can also lead to falsely elevated lactate levels. Because patients suspected of sepsis are often difficult to collect blood from, personnel performing these collections need to be aware of the effect of prolonged tourniquet time on lactate levels.

Postanalytical issues
One final issue, a postanalytical one, is the reference range used by laboratories for plasma or whole-blood lactate. Textbook or literature reference ranges are sometimes derived from studies of normal volunteers who had blood drawn without a tourniquet to avoid physiologic increases in lactate levels.

The combined reference range then accommodates some of the preanalytical issues with lactate collection to allow for better interpretation by clinicians. Laboratories that use an upper limit for the lactate reference range < 2.0 mM should determine whether those values can be consistently obtained under real-life conditions when drawing blood from hospitalized patients who are not septic or have conditions not associated with increased lactate values.

CONCLUSION
The problem of recognizing sepsis in the hospital, and of early intervention for severe sepsis and septic shock, has been a subject of increasing attention across the world. Early intervention in these patients can reduce mortality, and the information needed should be available but is too often not obtained rapidly enough and/or not collected and organized rapidly enough to initiate effective intervention.

Standardized sepsis resuscitation bundles are one tool that has been shown to reduce mortality from severe sepsis and septic shock. Lactate measurement is the first step in most of these resuscitation bundles. In our institution and others, point-of-care whole-blood lactate methods have proven invaluable in rapid recognition and intervention for severe sepsis and septic shock. Analytical performance of whole-blood lactate methods is suitable for this use, though caregivers should be aware of negative bias in some whole-blood methods at higher (> 6 mM) lactate levels.

How to Avoid Preanalytical Testing Errors: A Virtual Roundtable Discussion

It is estimated that a majority of all laboratory medicine errors are errors that occur during the...

How to Avoid Preanalytical Testing Errors: A Virtual Roundtable Discussion

It is estimated that a majority of all laboratory medicine errors are errors that occur during the...
All articles