Urea and the clinical value of measuring blood urea concentration

This first of two articles on understanding the clinical value of measuring urea concentration dives into the physiological topics, such as urea production and renal processing of urea as well as the causes of increased and reduced urea concentration.

Kidney disease is associated with reduced urea excretion and consequent rise in blood concentration. The advantages and limitations of measuring urea for the assessment of renal function will be explored in depth in this article and compared to creatinine in the upcoming follow-up article.

Urea is the principal nitrogenous waste product of metabolism and is generated from protein breakdown.

It is eliminated from the body almost exclusively by the kidneys in urine, and measurement of its concentration, first in urine and later in blood, has had clinical application in the assessment of kidney (renal) function for well over 150 years.

This is the first of two articles that together aim to explore current understanding of the clinical value of measuring serum or plasma urea concentration.

The main focus of this first article will be physiological topics, such as urea production and renal processing of urea, along with the causes of increased and reduced plasma/serum urea concentration.

By way of introduction, this first article begins with a brief historical perspective.

Urea owns special historical significance compared with most other analytes currently measured in the clinical laboratory or at the point of care.

The application of chemistry to medicine, from which emerged the discipline of chemical pathology (clinical chemistry) in the mid-19th century, has its origins in the early 18th century, when urine, the most readily available of body fluids, was first subjected to chemical analysis.

As the most abundant nonaqueous constituent of urine, urea featured from the beginning of this long story. Discovery of urea is credited to the Dutch physician Hermann Boerhaave who first isolated it, in impure form, from urine around 1727 [1].

The first pure preparation of urea from urine was made in 1817 by the English physician/ chemist William Prout [2]. Urea was the first organic chemical to be synthesized from inorganic chemicals.

This synthesis, which was serendipitously achieved by Friedrich Wöhler in 1828, has particular significance because it marked the birth of organic chemistry and raised the first doubts about the then long-held popular belief that an undefined “vital force” was required to synthesize chemicals involved in the process of living organisms [3].

The presence of urea in blood and confirmation of its identity with that found in urine was demonstrated in 1822 [1] but reliable methodology for determination of the concentration of urea in blood had to wait until the early years of the 20th century [4].

In the meantime, it was clear by the mid-19th century that kidney disease was associated with reduced urinary excretion of urea, and estimation of urea in urine for clinical purposes was established by this time [5],[6].

Improved methods of blood urea estimation in the early decades of the 20th century allowed plasma/serum urea concentration to emerge as the most widely used routine test of renal function, a pre-eminence that continued for close to 60 years.

In recent times, plasma creatinine estimation has emerged as the preferred first-line test for laboratory assessment of renal function [7],[8] but measurement of plasma/serum urea concentration continues to have clinical value in the 21st century – albeit much less so than was once the case. 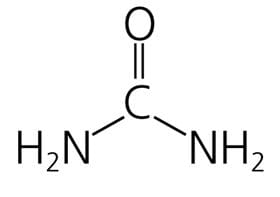 It is the principal nitrogenous end product of protein and amino acid catabolism. Proteins are first degraded to constituent amino acids, which are in turn degraded (deaminated), with production of ammonia (NH3), which is toxic.

In a series of five enzymatically controlled reactions, known collectively as the “urea cycle”, toxic ammonia resulting from protein breakdown is converted to non-toxic urea.

In addition to ammonia and the five ”urea cycle” enzymes, endogenous production of urea requires the presence of bicarbonate, aspartate and energy input in the form of adenosine triphosphate (ATP).

Carbon dioxide (CO2) is a secondary product of the urea cycle. Almost all of this urea production occurs in the cells of the liver (hepatocytes); the only other source is the cells of the kidneys.

Starvation is, perhaps counterintuitively, associated with increased urea production but this is explained by the increased protein released from muscle tissue breakdown (autolysis) that occurs during starvation to provide an energy source.

Any pathology associated with tissue breakdown is for the same reason associated with increased urea production. Detail of the urea cycle and its regulation is the subject of a recent review [9].

A small amount (<10 %) of urea is eliminated via sweat and the gut, but most of the urea produced in the liver is transported in blood to the kidneys where it is eliminated from the body in urine.

This process of renal elimination, which is detailed in a recent review [10], begins with filtration of blood at the glomeruli of the approximately 1 million nephrons contained within each kidney.

Urea is both reabsorbed and secreted (recycled back into the filtrate) during passage of the filtrate through the rest of the tubule of the nephron; the net effect of these two processes results in around 30-50 % of the filtered urea appearing in urine.

The facility of the kidney to adjust urea reabsorption and secretion as the filtrate passes through the tubule determines an important role for urea in the production of a maximally concentrated urine, when this becomes necessary.

The mechanism of this water-conserving action of urea within the nephron is well detailed by Weiner et al [10].

Measurement of plasma/serum urea – a note on nomenclature and units

Around the world, essentially the same method of urea analyses is used, but the result is expressed in two quite different ways [11]. In the US and a few other countries, plasma or serum urea concentration is expressed as the amount of urea nitrogen.

Although plasma or serum is used for the analysis, the test is still, somewhat confusingly, commonly referred to as blood urea nitrogen (BUN), and the unit of BUN concentration is mg/dL.

[It is widely accepted that there is an age-related increase in plasma/serum urea concentration [11],[12] but this is not well defined and there is uncertainty as to whether it simply reflects an age-related decline in renal function as some studies [13] suggest, or occurs despite normal renal function as others [14] seem to suggest. The results of [14] suggest that healthy elderly individuals (without any apparent loss of renal function), may have BUN levels as high as 40-50 mg/dL
(14.3-17.8 mmol/L)].

By far the highest levels occur in the context of reduced urinary elimination of urea due to advanced renal disease and associated marked reduction in glomerular filtration rate (GFR).

GFR is a parameter of prime clinical significance because it defines kidney function. All those with reduced kidney function, whatever its cause have reduced GFR and there is good correlation between GFR and severity of kidney disease.

The value of urea as a test of renal function depends on the observation that serum/plasma urea concentration reflects GFR: as GFR declines, plasma/serum urea rises.

The limitation of urea as a test of renal function is that in some circumstances plasma urea is not a sufficiently accurate reflection of GFR. For example, urea is an insensitive indicator of reduced GFR; GFR must be reduced by around 50 % before serum/plasma urea increases above the upper limit of the reference range [15].

Furthermore, urea may be raised despite a normal GFR (i.e. normal renal function) so as a test of renal function, urea lacks specificity [7],[8],[15].

The causes of increased plasma/serum urea in association with normal GFR, i.e. normal renal function, include the physiological and the pathological. The two physiological causes are increased dietary protein and ageing.

The role of urea in the maximal conservation of water by the kidney involves increased urea reabsorption and consequent tendency to mild increase in plasma/serum urea.

Low circulatory states such as heart failure [17], dehydration [18], hypovolemic shock, necessarily invoke aspects of this adaptive response and all may be associated with mild increase in plasma/serum urea, despite normal GFR.

Drugs that induce a catabolic state with increased protein breakdown and consequent increased urea production can cause plasma/serum urea to rise slightly; the most widely cited drug group to have this effect is the corticosteroids.

Since urea concentration in plasma or serum reflects the balance between urea production and urea elimination in urine, reduced plasma/serum urea can be caused by decreased urea production, increased urinary urea excretion, or a combination of the two.

There are two physiological causes of reduced concentration: low-protein diet, and pregnancy.

Pathological cause of reduced urea concentration is largely confined to advanced liver disease [20].

This reflects the central role that the liver plays in urea production via the urea cycle. Inherited deficiency of any one of the five enzymes of the urea cycle describes a rare group of conditions (called the urea cycle defects) that can give rise to reduced urea synthesis and consequent reduced plasma/serum urea concentration.

The causes of increased and decreased plasma/serum urea are listed in boxes below:

In general, the non-renal causes of increased plasma/serum urea result in a mild to moderate increase (usually no greater than 10.0 mmol/L (BUN 28 mg/dL). Concentration in patients with renal dysfunction can range from mildly increased to severely increased, depending on severity of disease.

The higher the concentration above 10 mmol/L, the greater is the chance that it is due to renal disease, but a slight increase cannot, of itself, be assumed to be due to a non-renal cause.

Urea is a waste product of metabolism that is excreted by the kidneys in urine. Kidney disease is associated with reduced urea excretion and consequent rise in blood concentration.

Once the primary laboratory test for detection and monitoring of reduced renal function (kidney disease), that role is now fulfilled by the plasma/serum creatinine test.

The limitation of urea as a test of renal function relates to reduced sensitivity and specificity so that a normal urea does not necessarily exclude renal disease and a slight to moderate increase in urea cannot be assumed to be due to renal disease.

There are many non-renal causes that can be associated with such a rise and for some of these conditions, e.g. heart failure, dehydration is common. By comparison with urea, creatinine measurement is no more sensitive but is more specific.

Under some circumstances urea may be more sensitive for detection of early renal disease than creatinine, so it has some advantage.

These issues will be explored further in a second article that will focus on the clinical value of measuring urea and creatinine together and calculating the urea: creatinine ratio.

Clinical laboratory measurement of serum/plasma creatinine concentration has been used to assess...
All articles