In emergency care triage, diagnosis and intervention time is usually important. In addition to a validated decision process, further analyses are often needed to make decisions concerning priorities, diagnostics and treatment, preferably in close association with the initial medical assessment.

At the Emergency Medical Department the relationship between priority and outcomes in patients with high blood lactate is being studied, along with lactate's effect on reassessment.

The group with high blood lactate is given higher priority in accordance with RETTS, had longer inhospital care and higher hospital mortality. Their vital signs on admission are also more affected. Blood lactate is a variable included in the RETTS protocol, and values >5 mmol/L result in reclassification to a higher priority.

We conclude that blood lactate taken on admission provides additional useful information that can offer further support during the acute processing phase.

Early identification and prioritization of patients treated in emergency departments (ED) is important for medical safety and quality (1-4). The goal is to provide the highest safety level in emergency treatment triage and to reduce processing times for diagnostics, decisions and interventions in the ED.

Most EDs use some method of triage, and in Sweden most EDs and ambulance organizations are switching to a validated protocol that also contains laboratory test and intervention recommendations (1-4), which most triage systems lack (5-8). Previous studies have shown that examinations of vital signs are important for predicting the mortality of sick patients (8-9). Various blood analyses have been shown in previous studies to facilitate the patient prioritization (10-13).

Most studies have a weakness from an emergency care perspective, in that they are conducted on selected patients or diagnostic groups, such as sepsis (14) and trauma (15), and that inclusion in the studies takes place at various phases of the emergency care process, which reduces the utility of this information for nonselected patients.

Blood lactate has previously been proposed for inclusion as a routine test in emergency departments (16). The Emergency Medicine Department at Sahlgrenska University Hospital uses the RETTS* (Rapid Emergency Triage and Treatment System), and this protocol includes three different sampling series depending on priority or acuteness and an algorithm to facilitate reprioritization depending on laboratory test results (1-4).

The primary purpose of this study was to investigate how initial assessments using the RETTS protocol correlate with blood lactate level at admission and to what extent patients are reprioritized on the basis of high blood lactate.

* In the 2010 version the name METTS was change to RETTS.

Approximately 49,000 patients are treated annually at the ED, and all undergo an initial examination, sampling and actions taken in accordance with the RETTS protocol (1-4).

The METTS protocol handles test results using a special algorithm (Figure 1) that can move a patient up to the next highest priority, where continuous observation is obligatory and a medical evaluation must be undertaken immediately.

FIG 1: Excerpt of RETTS, algorithm 70. Reprioritization based on laboratory test results. The orange frame indicates the priority that the patient receives when one or more test results match these values. NB: The reference values may vary between different hospitals and laboratories.

The RETTS protocol has been validated for sensitivity in predicting mortality, required resources and interindividual variability (2.4).

The initial examination in accordance with RETTS requires blood sampling from patients with red, orange and yellow priorities, while blood samples will only be drawn from green-priority patients in cases where the algorithm recommends it based on the reason the patient was admitted.

The standard analysis in RETTS uses venous blood gases as well as lactate. We prefer venous blood gases because this method is simple and reliable. Venous blood gases were determined in heparinized blood at a local point of care laboratory. The RETTS initial examination procedure has been previously described in detail elsewhere (1-2).

All statistical analyses were carried out with SPSS version 17.0 (SPSS Inc, Chicago, IL, USA) and Student's t-test and ANOVA were used for cross-group analyses.

The percentage of men (62%) was significantly (p<0.02) higher than women in the group with high blood lactate, while there was an equal distribution of sexes in the normal blood lactate group.

The duration of inhospital care was significantly longer in the high blood lactate group (Table 1).

There was no difference in age between the groups. The range and distribution of blood lactate, by group, is presented in Figure 2.

When the study data was grouped by assigned RETTS patient priority on arrival at the ED, the highest priority group was found to be significantly older, had higher blood lactate values and a longer duration of care compared to patients with lower priority levels.

There was a higher rate of mortality in the higher priority levels. Reprioritization to orange priority occurred in 6 (15%) green priority cases and 37 (29%) yellow priority cases using the algorithm based on laboratory test results (Table 2 and Figure 1).

The most common reasons for admittance among the high lactate patients who were reprioritized were a history of seizures, alcohol abuse, intoxication and acute abdomen. There was a significant correlation between blood lactate and base excess, r = 0.57 (p<0.001). 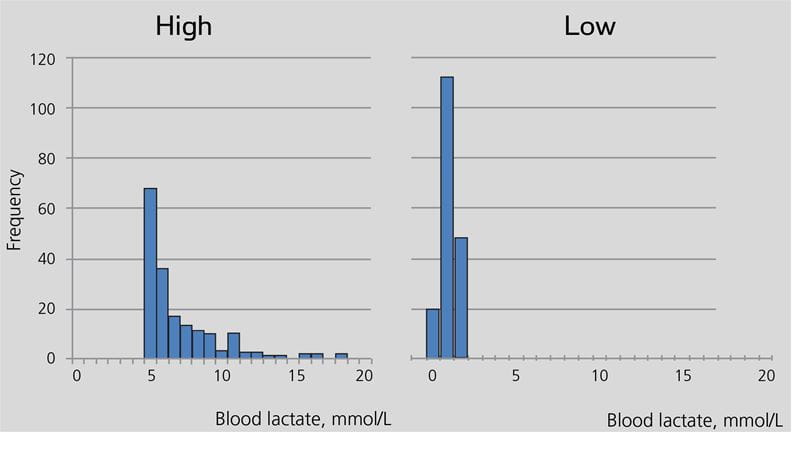 There is an association between vital signs and blood lactate level on admission.

The need for inhospital care among the high blood lactate group was 75% (n=135), and 60% (n=81) of these 135 patients were initially treated under observation (ICU, CCU, Dept. of Medicine, Acute Care).

This study demonstrated a significant relationship between blood lactate at arrival in the ED, and RETTS protocol priority levels and mortality among unsorted, consecutive patients.

Most triage protocols, official and validated, do not include systematic assessment of vital signs. Instead, patients are primarily sorted according to symptoms and signs, often at the reception or cashiers' windows (5-7).

In other studies, blood lactate has primarily been studied in selected, acute patients (14-15). It may therefore be difficult to draw general conclusions based on these studies. In our study, we examined a relatively large number of patients who were admitted for a variety of reasons and had varying levels of emergency care. The same, systematic protocol was applied to all patients.

We found a clinically relevant association between blood lactate and the patient's clinical condition regarding objective variables. Blood lactate was measured simultaneously at the time the patient was assessed and prioritized, which further strengthens the clinical relevance of the results.

In other studies, blood lactate samples were collected at different phases of the emergency care process, which is likely to affect the results (19).

The use of venous blood to analyze blood gas and lactate is occasionally criticized, but several studies have shown a good relationship between arterial and venous samples with regards to blood lactate (18-19).

Support that blood lactate can be used extensively

Venous samples, analyzed in our point of care local laboratory, have been used by the ED since 2005 to analyze blood gases and blood lactate as standard analysis, depending on the priority level and RETTS protocol algorithm. Hemoglobin, glucose and electrolytes are also included in this standard analysis.

Our experiences at Sahlgrenska Hospital provide some support to Vroonhof et al (16) who claim that blood lactate should be used for relatively wide indications at EDs. A structured protocol should be used to eliminate the random element regarding who should have blood tests and when.

Venous blood gases including blood lactate are inexpensive, easily analyzed, reliable and contain considerable information about the patient's metabolic, respiratory and circulatory condition. Elevated blood lactate can be seen in a number of frequently occurring conditions where the patient is not simultaneously displaying clear signs of organ failure.

Patients suffering from seizures, alcohol intoxication, acute abdomen, sepsis and localized ischemia are those most commonly found to have elevated blood lactate in the ED. Blood gas measurements are a suitable type of near patient testing in the ED where rapid analyses and results are often needed.

Our study also showed some correlation between blood lactate and base excess, which may be important to know for those EDs not able to analyze blood lactate directly.

Our study showed lower mortality rates than in previous studies (13) with the same or lower blood lactate levels. This may be due to different patient populations, patient selection or varying sampling times in comparison with previous studies.

Our study included all consecutive patients who met the criteria for measuring blood lactate. RETTS does not normally recommend that venous blood gases be measured for green priority patients.

This study found high blood lactate in a number of both yellow priority and green priority patients.

The reasons for this high blood lactate include a history of seizures, alcohol abuse, poisoning and acute abdomen, a condition in which the patient often does not ingest food or drink for an extended period, which may also lead to moderately elevated blood lactate.

According to the RETTS protocol, patients with >5 mmol/L blood lactate are reprioritized to orange. Previously, a relationship had also been found between hypoperfusion and high blood lactate levels, as was the case in our study.

Some of the patients with red priority showed clinical signs of hypoperfusion with elevated heart rates and low blood pressure.

Additional information can be achieved by measuring blood lactate

Our data also indicates that for patients receiving a high RETTS priority, blood lactate may provide additional information about the patient's clinical condition, even when blood lactate is used alone (20).

High sensitivity in a protocol such as RETTS may result in some "overtriage", which means that some patients may be assigned too high a priority. Even for these patients, the analysis of venous blood gases may provide important additional information for the physician's assessment of how acutely ill the patient is.

Based on our clinical experience of measuring blood lactate upon arrival at the ED, we believe it is an important addition to the protocol in some cases and its use increases the sensitivity and precision of care provision, as well as improving patient safety in the ED.

Sepsis is a major cause of mortality and morbidity for hospitalized patients around the world....

Sepsis is a major cause of mortality and morbidity for hospitalized patients around the world....