To assess anemia and reduced oxygen-carrying capacity, a measurement of hematocrit and/or hemoglobin is performed. Whether hemoglobin or hematocrit is preferred depends on different needs and is often determined by tradition.

Both hematocrit and hemoglobin are important hematology parameters for diagnosing critically ill patients. In recent years, both parameters have also been offered as STAT parameters on instruments such as blood gas analyzers. This article describes and discusses some routine laboratory and point-of-care methods of measuring hematocrit.

This article describes the advantages and disadvantages of the different methods of measuring hematocrit by discussing the following:

This article will be followed by another article describing the different methods of determining hemoglobin.

THE COMPONENTS OF WHOLE BLOOD

In blood from healthy individuals, erythrocytes constitute the vast majority of cells; the erythrocytes contain hemoglobin (Hb), which gives blood its red color and which has oxygen-binding abilities. Plasma mainly consists of water (approx. 93 %) but also of salts, various proteins and lipids as well as other constituents, e.g. glucose. 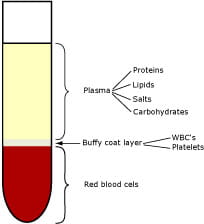 The definition of hematocrit (hemato from the Greek haima = blood; crit from the Greek krinein = to separate) is the ratio of the volume of packed red blood cells to the total blood volume and is therefore also known as the packed cell volume, or PCV.

The hematocrit is reported as a percentage or a ratio. In healthy adult individuals the red blood cells constitute approx. 40-48 %, whereas newborns may have hematocrits of up to 60 % [1].

The layer between the RBCs and plasma, the buffy coat layer, constitutes approx. 1 %. It consists of WBCs and platelets and should therefore not be calculated as part of the packed cell volume.

The relationship between hematocrit and hemoglobin

The following is a summary of the quantities/abbreviations that are relevant when discussing hematocrit:

In normal conditions there is a linear relationship between hematocrit and the concentration of hemoglobin (ctHb). An empirical study [2] has shown that the relationship can be expressed as follows:


Hematocrit can also be estimated from measurements of the mean cell volume (MCV) or the mean corpuscular hemoglobin concentration (MCHC):

Hematocrit measurements may be requested when it is suspected that a patient is anemic or suffering from dehydration, bleeding or other medical and surgical conditions.

A low hematocrit reflects a low number of circulating red blood cells and is an indicator of a decrease in the oxygen-carrying capacity or of overhydration. Examples of conditions causing a low hematocrit (anemia) include [3]:

A low hematocrit may be found in autoimmune diseases and bone-marrow failures.

A high hematocrit may reflect an absolute increase in the number of erythrocytes, or a decrease in plasma volume, in conditions such as [3]:

High hematocrit is also used as an indicator of the excessive intake of exogenous erythropoitin (EPO), which stimulates the production of red blood cells. Athletes can artificially improve their performance by enhancing the oxygen-carrying capacity with EPO.

In newborns and especially premature babies, high hematocrit values are common. The hematocrit of infants reaches the level of adult hematocrit by approx. three months of age [1].

The conditions leading to low hematocrit values, e.g. hemorrhage, often require continuous measurements of the hematocrit and fast decisions concerning transfusions. If the hematocrit is measured immediately after an acute hemorrhage, the value will be normal until the decreased blood volume is corrected by fluid shifts into the blood vessels.

This section gives a technical description of the most commonly used techniques for measuring hematocrit:

The reference method recommended by NCCLS of determining hematocrit or packed cell volume (PCV) is centrifugation.

Method [4]:
Hematocrit (PCV) is the measure of the ratio of the volume occupied by the red blood cells to the volume of whole blood. The blood sample is drawn into a capillary and centrifugated, and then the ratio can be measured and expressed as a decimal or percentage fraction.

Method:
The hematocrit is determined indirectly from the average size and number of RBCs. The reference method is the Coulter impedance principle [6] and is described below. 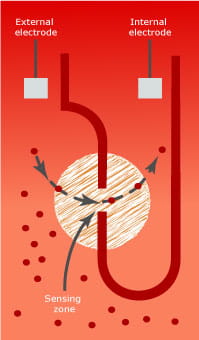 Three factors besides the number of RBCs are critical for the determination of the hematocrit value when using a method based on measurement of electrical conductivity:

Most blood gas analyzers allow for these variables as follows:

4. Calculation of hematocrit from hemoglobin

As there is a linear relationship between hemoglobin (ctHb) and hematocrit as described earlier, it is possible to calculate the hematocrit on analyzers that measure hemoglobin. When making this conversion, two factors should be taken into consideration:

The measurement of ctHb from most good-quality analyzers is usually reliable; however, the equations used to calculate the hematocrit vary from analyzer to analyzer. Some analyzers use an empirically found equation [2,13] whereas others use an approximate conversion factor of 3 [14,15].

All measuring technologies for determining hematocrit have advantages and disadvantages. The following table provides an easy overview of the described methods. The advantages/disadvantages listed have all been found by reviewing the literature, i.e. no prioritizing according to importance has been done.

When hematocrit is used to assess anemia and the oxygen-carrying capacity, the advantages and disadvantages of each method must be carefully considered. In addition, the specific clinical and analytical needs for any patient population must be determined.

Hematocrit is traditionally a routine hematology laboratory parameter; however, measuring hematocrit as a STAT parameter in a POC setting is in many ways preferable, as this will save time in critical situations and avoid specimen transport problems. Some blood gas analyzers offer this possibility, either by measuring hematocrit by conductivity or by calculating hematocrit from ctHb.

Hemoglobin is also used to assess anemia both in the laboratory and as a STAT parameter on POCT analyzers. Different hemoglobin measuring methods and their applications will be discussed in another article.

Both POCT and traditional laboratory methods of measuring or calculating hematocrit have limitations. Methods used outside of the laboratory must be intuitive for users without time-consuming sample handling.

Methods suitable for an adult environment may not be suitable for a neonatal environment due to sample volume limitations. Some methods are not suitable in certain applications due to e.g. problems associated with volume expansion fluids or abnormally sized or shaped red blood cells.

These limitations can have important clinical implications and must be carefully considered as described in this article.