Both in the inpatient and the outpatient setting the natriuretic peptides seem to have a potential for optimizing heart failure management. At discharge the natriuretic peptides are prognostic for mortality and/or readmission and thus give helpful guidance on the appropriate time for discharge. In the outpatient setting the natriuretic-peptide-guided therapy has been shown to give significantly reduced all-cause mortality and heart-failure-related hospitalizations when compared to clinically guided therapy.

This article is based on a literature review, and kindly reviewed by Dr J. Januzzi, US, Prof C. deFilippi, US, and Dr P. Ray, France.

Complex cases, combined with limitations on time, specialist staff and investigations create uncertainty around admissions and difficulties when communicating with intensive care units (ICUs) and other departments [1]. In a recent US study, 30-day readmission rates for heart failure were high, at 25 % which could be related to these uncertainties [2].

Lengthy patient evaluation and turnaround times coupled with late or incorrect diagnosis and treatment result in higher morbidity and mortality, as well as increasing treatment costs [1,3].

This paper provides a practical overview of the potential for natriuretic peptide (NP) testing to help streamline care pathways and improve outcomes, in both the acute and chronic cardiac care settings.

The brain natriuretic peptide (BNP) gene is activated in cardiomyocytes when myocardial wall stress is increased by an overload of volume or pressure [4]. The resulting precursor peptide (proBNP108) is cleaved into two parts: active BNP, and inactive N-terminal (NT)-proBNP, which are released into the circulation (Fig. 1) [5].

FIG. 1: BNP and NT-proBNP are secreted from cardiomyocytes at the same time

Adapted from Martinez-Rumayor A, Richards AM, Burnett JC, Januzzi JL. Biology of the Natriuretic Peptides. Am J Cardiol

ProBNP108, as well as various degradation products of BNP, can also be found in the bloodstream [4]. In cases of heart failure, a large increase in the usually low BNP levels occurs, leading to positive downstream effects, including vasorelaxation and natriuresis [4].

Both BNP and NT-proBNP can be detected in the circulation. Whilst increased levels of these biomarkers are not exclusive to incidences of heart failure, studies have shown that they can be sensitive and specific diagnostic biomarkers for heart failure when used as an adjunct to clinical judgment [6,7]. The 2012 European Society of Cardiology (ESC) and 2013 American College of Cardiology Foundation/American Heart Association (ACCF/AHA) guidelines name BNP and NT-proBNP as suitable biomarkers, along with a medical history, physical examination and ECG, for the diagnosis, prognosis and management of patients with acute and non-acute onset heart failure [8,9].

Heart failure is defined by the presence of typical symptoms such as dyspnea, fatigue and/or fluid retention due to cardiac dysfunction. These typical, yet non-specific symptoms can make heart failure difficult to diagnose [8]. Inaccurate emergency diagnosis of elderly patients with acute respiratory failure was shown to be as high as 20 % by the French EPIDASA Study Group [10]. These missed diagnoses were associated with highly significant increases in mortality, and highlighted the need for diagnostic tools with high specificity and sensitivity that can be accessed quickly in a busy ED environment [10].

The potential for NPs to augment clinical judgment and standard diagnostic tools has been identified in US and European studies. In the US Rapid Emergency Department Heart Failure Outpatient Trial (REDHOT), physicians were blinded to BNP levels when making admission decisions, and on analysis, BNP levels were in fact higher in those patients who were discharged [11].

In fact, BNP levels were more than twice as high (2,096 vs. 764 pg/mL) in patients who were deceased at 30 days vs. those who were alive [10]. This pattern was maintained at 90 days, indicating that BNP would indeed have been useful when deciding whether a patient should have been admitted [11].

By helping to confirm or rule out a diagnosis of heart failure, NPs can help inform and expedite treatment decisions. Faster BNP measurement was associated with more expedient initiation of diuretic therapy, with a modest improvement in mortality in an analysis of US Acute Decompensated Heart Failure National Registry (ADHERE) study data [12].

Looking at NP testing as part of the overall care pathway, a randomized controlled trial (RCT) of 452 patients presenting at a Swiss ED – the B-type Natriuretic Peptide for Acute Shortness of Breath Evaluation (BASEL) study – showed that those assigned to receive rapid, point-of-care BNP testing were discharged faster (8 vs. 11 days, p=0.001) than those assigned to standard assessment [1].

PRACTICAL IMPLEMENTATION OF NATRIURETIC PEPTIDE TESTING IN THE EMERGENCY DEPARTMENT

NPs must be considered as part of a wider diagnostic pathway, as an adjunct to clinical assessment. When establishing testing in the ED setting, it is important to reach a consensus about how best to integrate NPs within the individual hospital, and to understand how to interpret NP findings.

Given the key importance of rapid NP results [12], NP levels are best measured at the point of care, but the central lab should play a key role in developing and overseeing testing protocols. The choice of NP to use can be made to suit local needs, since BNP and NT-proBNP appear to be similar in diagnostic accuracy [16-18] and both are recommend for use by the ESC and ACCF/AHA [8,9].

Interpretation of NP results requires knowledge of potential confounders – factors other than heart failure that could cause increased NP levels [7,19].

Table I: Optimal NT-proBNP cut-points for the diagnosis or exclusion of acute heart failure among dyspneic patients

In gray areas, other disease patterns such as pulmonary embolism or pneumonia must also be considered in the differential diagnosis as these conditions can also result in an increase in the marker (Table I) [7]. Recommendations from Januzzi et al. for the overall integration of NP measures into acute dyspnea diagnostic pathways are shown in Figure 2 [6]. 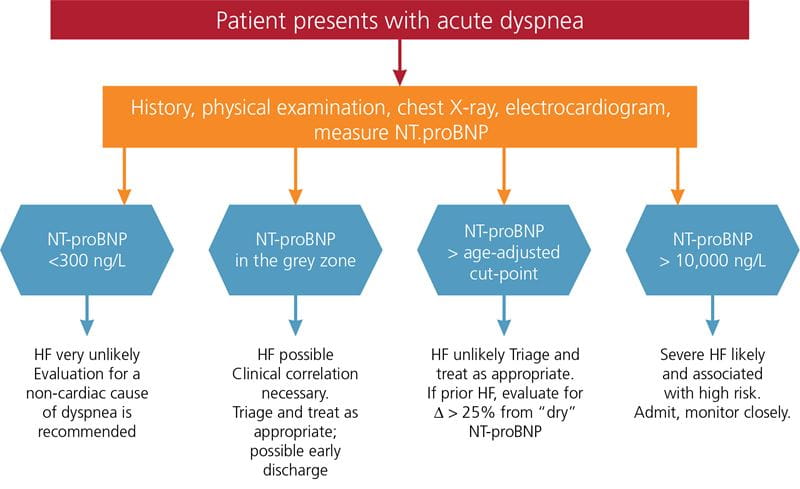 THE ROLE OF NATRIURETIC PEPTIDES WITHIN INPATIENT AND OUTPATIENT CARDIAC CARE

Once a patient has been admitted, NPs can play a role in monitoring treatment success and discharge planning. BNP levels were observed to decrease in correlation with falling pulmonary capillary edge pressure in a study of patients being treated for decompensated heart failure, which suggested a role in monitoring response to therapy [20].

In the Efficacy and Safety of Relaxin for the Treatment of Acute Heart Failure (RELAX-AHF) study, patients who achieved less than a 30 % decrease in NT-proBNP from Day 0 to Day 2 of treatment with serelaxin had an increased 180-day-all-cause-mortality vs. patients who achieved a greater decrease [20]. However, NPs might not be appropriate for monitoring success of all heart failure therapies. A study of nesiritide infusion showed that most patients who did achieve a clinical response did not show a significant decrease in BNP/NTproBNP levels [22].

Several studies have confirmed that NP levels at discharge (more than at admission) are prognostic for mortality and/or readmission, giving helpful guidance on the appropriate time for discharge according to the risk of future complications [23-30].

In the outpatient setting, BNP and NT-proBNP are promising tests to optimize chronic heart failure management, aiming to reduce readmissions and death. Two meta-analyses of RCTs testing therapy guided by NP levels (i.e. up-titrating therapy to achieve a certain level of or reduction in NP levels) have shown that this strategy led to significantly reduced all-cause mortality and heart failure-related hospitalizations vs. clinically guided therapy [31,32].

This strategy is now being tested in a large, US NIH-funded RCT called Guiding Evidence Based Therapy Using Biomarker Intensified Treatment (GUIDE-IT). GUIDE-IT is examining a strategy of titrating medical therapy based on minimizing NP levels in comparison with usual care, in high risk heart failure patients with left ventricular systolic dysfunction [33]. The primary endpoint is a composite of heart failure hospitalizations or cardiovascular mortality [33]. The planned recruitment is 1,100 patients, and the final data collection for the primary endpoint is expected in September 2017 [33].

NT-proBNP and BNP are biomarkers for heart failure in patients with dyspnea that have the potential to improve diagnostic accuracy in EDs, speed up and enhance management and admission decisions, and ultimately, improve outcomes and reduce costs when successfully integrated into care pathways [1,3,4,6,7]. Diagnostic thresholds have been developed that make this integration straightforward.

NPs should always be used as an adjunct to clinical assessment, rather than a replacement. Central labs and other stakeholders should play a key role in developing and overseeing point-of-care testing protocols [6-8].

The potential for NPs to guide up-titration of heart failure therapy is supported by an increasing body of evidence, and is currently being assessed in GUIDE-IT [33].

Clinical use of natriuretic peptide

Various guidelines and recommendations are available for the use of natriuretic peptides in the...

Various guidelines and recommendations are available for the use of natriuretic peptides in the...
All articles