Disturbance of sodium balance is a common occurrence among hospitalized patients that can, if not identified and treated, cause significant morbidity; severe disturbance is potentially lethal. So estimation of plasma sodium concentration is one of the most frequently requested blood tests.

This is the first of two linked articles that highlight the spurious sodium values that can occur if an indirect ISE technique is used to analyze plasma samples with abnormal protein or lipid concentration.

By way of introduction to the topic this first article will include discussion of the techniques used to measure plasma sodium and an explanation of the reason why abnormal lipid and protein concentration can give rise to erroneous results. But first there follows a very brief overview of the epidemiology and clinical significance of abnormal plasma sodium concentration.

Hyponatremia is the most common electrolyte disorder occurring in an estimated 15-30 % of in-hospital patients, according to one review [2]. A recent study [3] found that 10 % of patients presenting at the emergency department of a tertiary care hospital were hyponatremic.

Another [4] found that a remarkable 40 % of 469 consecutive acute medical-admission patients were hyponatremic; mild, moderate and severe hyponatremia being present in 25 %, 11 % and 3 % of this study cohort, respectively.

Hypernatremia is less common, affecting around 1 % of the general hospital population and 10-26 % of those in intensive care [5, 6]. Whilst most studies find hypernatremia to be less common than hyponatremia, that was not so for a large study of more than 8000 critically ill patients examining ICU-acquired sodium disturbance [7].

This is a medical emergency that initially causes non-specific symptoms such as headache, lethargy and nausea, but can, if left untreated, progress to seizures, coma and ultimately death [8].

Chronic mild-to-moderate hyponatremia is associated with impaired attention and increased risk of falls, osteoporosis and bone fracture [5]. Too rapid correction of hyponatremia can cause specific brain damage (osmotic demyelination) that itself is potentially lethal.

There is an ever-growing body of evidence that hyponatremia even without accompanying encephalopathy is associated with long-term mortality for many patients groups (e.g. those in intensive care, those with heart failure, cirrhosis, and pulmonary embolus, etc.) so that even mild asymptomatic hyponatremia might be clinically significant for many patient groups.

It remains unclear if the observed general association between hyponatremia and mortality means that hyponatremia has a causative role in the eventual death of patients or is merely a surrogate marker of other lethal risk factors associated with the underlying serious condition. This important unresolved aspect of hyponatremia is the subject of a recent review [9].

For over 80 years plasma sodium concentration has been routinely measured using either one of two broad techniques:

Prior to the 1970s when ion-specific electrodes were first developed for use in clinical laboratories, FES was the only method available. The technique [10] depends on the very visible principle that when sodium is burnt in a flame, it emits yellow light of a characteristic wavelength, the intensity of which is proportional to the number of sodium ions.

The method involves aspiration of diluted plasma as a fine spray into a controlled flame of stable form and temperature. The intensity of light emitted by the flame at a particular wavelength (539 nm) characteristic of sodium emission, is measured.

By comparing this intensity measurement with that produced from standard sodium solutions of known concentration, the concentration of sodium in the plasma sample can be computed.

Potentiometric measurement depends on the potential difference (measured in millivolts) that is generated between a reference and measuring electrode when exposed to ions in solution.

With the use of electrode membranes that allow selective passage of a single ionic species, an ion-specific electrode measures the activity of a specific ion (e.g. sodium (Na+), potassium (K+), calcium (Ca2+), chloride (Cl-), etc.) in solution (e.g. the aqueous phase of blood plasma).

Since the 1970s ISE methods have gradually replaced FES methods [11] and nowadays plasma sodium is measured almost exclusively by ISE.

ISE methods are classified as either ”indirect” or ”direct” [11]. The essential difference between the two is in the sample preparation.

The ”indirect” ISE method was the first to be developed and shown in many studies to correlate well without bias with the FES method it replaced [11]. It continues to be employed in modern high-throughput chemical analyzers sited in clinical laboratories, principally because predilution allows very low sample volume, a major consideration if sodium is just one of many analytes to be measured.

A small minority of these chemical analyzers employs a ”direct” ISE method, but the vast majority of sodium reports generated in the central hospital laboratory are derived using ”indirect” ISE methodologies.

A singular advantage of ”direct” ISE methodology for point-of-care testing is that whole blood can be used, so that the separation of plasma by centrifugation is not necessary.

Another advantage, of greater significance for this discussion, is that ”direct” ISE methods are unaffected by the presence of abnormal amounts of lipid or protein in the sample, whereas both ”indirect” ISE and FES methods are affected [12].

SIGNIFICANCE OF ABNORMAL PROTEIN AND LIPIDS FOR SODIUM MEASUREMENT

An understanding of the effect that abnormal plasma protein and lipid concentration has on sodium measurement depends on recognizing the following: 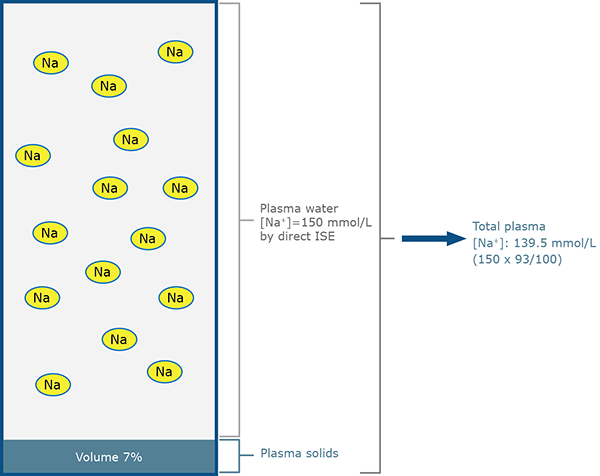 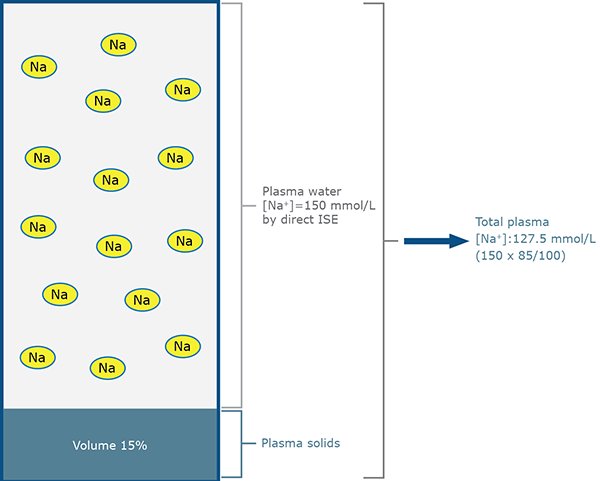 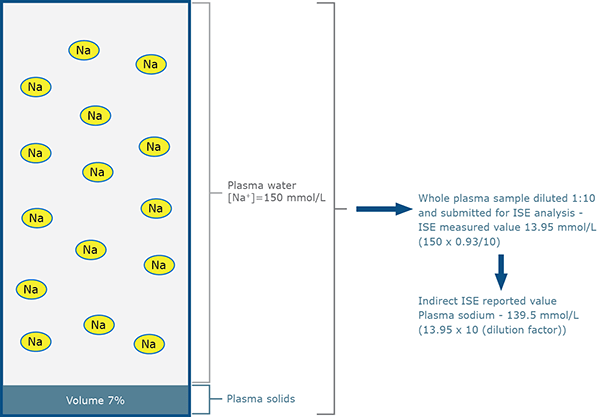 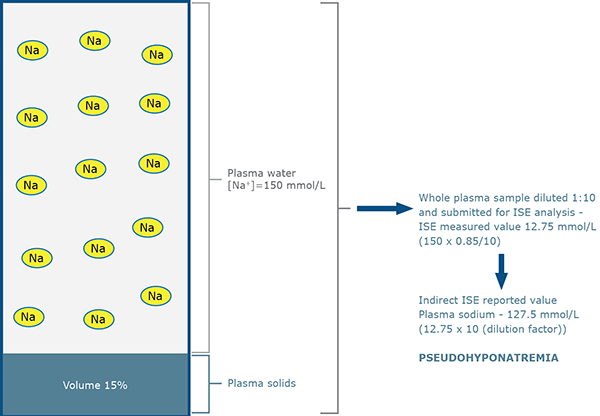 Patient B has increased plasma lipid concentration and therefore reduced plasma water volume, in this case 85 %. The plasma samples of both patients are submitted for sodium estimation by ”direct” ISE (Figs. 1a, 1b) and ”indirect” ISE (Figs. 2a, 2b).

As outlined above, change in lipid and/or protein concentration does not affect direct ISE measurement so results are identical.

However, the predilution (1:10) process of indirect ISE measurement results in fewer sodium ions being presented to the electrode in the case of patient B because in unit volume of plasma, less is occupied by water where the sodium resides (85 % compared with 93 %).

Despite having a normal concentration of sodium in plasma water, patient B is apparently hyponatremic due to raised lipids. The term pseudohyponatremia is applied to this spuriously reduced sodium result.

The term pseudohyponatremia is sometimes inappropriately applied to the hypertonic hyponatremia that results most frequently from severe hyperglycemia in diabetic ketoacidosis [16].

It is an inappropriate use of the term because the hyponatremia in such cases is real (it results from the movement of water from cells to ECF due to the osmotic effect of glucose; sodium is effectively diluted but plasma osmolality is normal or increased).

CONDITIONS THAT CAN RESULT IN PSEUDOHYPONATREMIA

The simplest way of confirming that plasma sodium concentration is spuriously low, is to reanalyze the sample using a direct ISE method; pseudohyponatremia is confirmed if direct ISE value is normal, and excluded if it is similar to the original reduced indirect ISE result.

FAILURE TO RECOGNIZE PSEUDOHYPONATREMIA CAN HAVE SERIOUS CONSEQUENCES - A CASE STUDY

A 6-year-old, insulin-dependent diabetic boy was admitted to hospital in a comatose and dehydrated state following 2 weeks of intermittent vomiting and abdominal pain. Opthalmoscopic examination revealed an abnormality of the eyes (lipemia retinalis) that is caused by severe hyperlipidemia.

Later analysis of this admission sample would reveal that serum triglyceride concentration was 223 mmol/L and cholesterol concentration 41.4 mmol/L. No connection was made between the severe hyperlipidemia and hyponatremia.

Since pseudohyponatremia was not recognized, the apparent hyponatremia was treated inappropriately with 0.9 % saline, beginning 2 hours after admission. As a result of the saline treatment serum sodium increased to 116 mmol/L at 7 hours after admission but there was clinical evidence (right hemiplegia and tonic convulsions) of evolving brain damage.

The child’s condition deteriorated and he died 33 hours after admission due to brain hemorrhage. The 7 hours post admission serum sample with apparent sodium of 116 mmol/L was treated to remove the lipids and reanalyzed. The true serum sodium was found to be 222 mmol/L.

The inappropriate treatment had caused very severe hypernatremia and associated encephalopathy that almost certainly contributed to the boy’s death.

Preanalytical errors are said to be the reason for up to 75 % [1] of all errors in laboratory...

The measurement of the electrolytes in blood is one of the most frequently performed measurements...

Plasma sodium concentration is measured with an ion-specific electrode (ISE) using either an...

Preanalytical errors are said to be the reason for up to 75 % [1] of all errors in laboratory...

The measurement of the electrolytes in blood is one of the most frequently performed measurements...

Plasma sodium concentration is measured with an ion-specific electrode (ISE) using either an...
All articles