Why measure blood gases? A three-part introduction for the novice. Part 2.

Arterial blood gases (ABG), a clinical test that involves measurement of the pH of arterial blood and the amount of oxygen and carbon dioxide dissolved in arterial blood, is routinely used in the diagnosis and monitoring of predominantly critically/acutely ill patients being cared for in hospital emergency rooms and intensive care units.

The test allows assessment of two related physiological functions: pulmonary gas exchange and acid-base homeostasis. This is the second of three articles intended to explain the clinical value of ABG to those with little or no experience of the test. The first article focused on the physiological aspects that underpin an understanding of patient ABG results.

The concepts of pH, acid, base and buffer were explained, and the parameters generated during ABG were defined and related to pulmonary gas exchange and acid-base homeostasis.

In this second article attention turns to the clinical significance of abnormal ABG results, specifically abnormality in three ABG parameters (pH, pCO2(a) and bicarbonate) that determine patient acid-base status. A major focus of the article will be an explanation of the four classes of acid-base disturbance: respiratory acidosis, metabolic acidosis, respiratory alkalosis and metabolic alkalosis. The causes and physiological consequence of each of these disturbances will be discussed.

Disturbance of acid-base homeostasis is characterized by abnormality in one or more of three parameters (pH, pCO2(a) and bicarbonate) generated during blood gas analysis. So long as all three parameters are within their respective reference (normal) range, it can be assumed that the mechanisms involved in maintaining the pH of blood within healthy limits (i.e. acid-base homeostasis) are working adequately and normal acid-base status is assured.
Intuitively, it might be supposed that if a patient’s blood pH is within the reference (normal) range, then that patient has normal acid-base balance. That is not the case; as will become clear it is quite possible - indeed not uncommon - for a patient with disturbance in acid-base balance to have blood pH within the reference (normal) range, 7.35-7.45.

Nearly all clinically significant disturbances of acid-base homeostasis can be attributed to one or more of three broad causes:

Given the wide range of medical conditions that can be associated with disturbance of acid-base balance it is useful, when presented with a patient whose acid-base is disturbed, to narrow down the possible cause by classifying that particular patient’s acid-base disturbance to one of four classes, which are:

To understand how patient ABG results (pH, pCO2(a) and bicarbonate concentration) are used to identify an acid-base disturbance and, through classification, narrow down its cause, we must return to a relationship between these three measured parameters that was introduced in the first article:

This simple relationship, which is crucial to an understanding of all that follows, reveals that the pH of blood is a function of both bicarbonate concentration and pCO2(a), specifically that pH is proportional to the ratio of bicarbonate concentration to pCO2(a). Importantly, for understanding patient ABG results, the relationship allows the following five deductions:

4 - If both pCO2(a) and [HCO3–] are increased by relatively the same amount, the ratio and therefore blood pH are normal.

5 - If both pCO2(a) and [HCO3–] are decreased by relatively the same amount, the ratio and therefore blood pH are normal.

The two components, pCO2(a) and bicarbonate concentration, that determine blood pH in the above relationship are referred to as the ”respiratory” and ”metabolic” (or non-respiratory) components, respectively, when discussing acid-base balance.

RESPIRATORY ACIDOSIS is characterized by increased pCO2(a), which in line with deduction 3 above results in reduced pH (i.e. acidosis).

RESPIRATORY ALKALOSIS is characterized by decreased pCO2(a), which in line with deduction 2 above results in increased pH (i.e. alkalosis).

METABOLIC ACIDOSIS is characterized by decreased bicarbonate, which in line with deduction 3 above results in decreased pH (i.e. acidosis).

METABOLIC ALKALOSIS is characterized by increased bicarbonate, which in line with deduction 2 above results in increased pH (i.e. alkalosis).

CAUSES OF THE FOUR ACID-BASE DISTURBANCES

Respiratory acidosis, defined by increased pCO2(a), is almost invariably the result of inadequate alveolar ventilation (hypoventilation). In effect, accumulation of CO2 in blood is due to reduced excretion by the lungs.

A number of pulmonary (lung) conditions can be associated with hypoventilation sufficient to cause respiratory acidosis, including chronic obstructive airways disease (COAD), acute respiratory distress syndrome (ARDS), bronchopneumonia, severe ( life-threatening) acute asthma and pulmonary edema. Disease or trauma to the chest wall and the musculature involved in the mechanics of respiration can result in hypoventilation.

This explains the respiratory acidosis that can occur in poliomyelitis, Guillain-Barré syndrome and traumatic chest injury (flail chest).

Respiratory alkalosis, defined by decreased pCO2(a), is always the result of increased alveolar ventilation (hyperventilation). In effect, excessive rate of breathing leads to increased excretion of CO2 by the lungs and consequent reduced amount of CO2 in blood.

In a critical care setting metabolic acidosis is the most frequent acid-base disturbance and the most common cause is increased production of the metabolic acid, lactic acid. Lactic acid is produced in excess by tissue cells that are poorly oxygenated, so metabolic (lactic) acidosis can arise in any clinical condition in which oxygen delivery to tissues is compromised.

The liver is the major site of lactic acid metabolism so that accumulation of lactic acid and resulting metabolic acidosis can arise in advanced liver disease (cirrhosis, liver failure).

Increased production of the metabolic acids, ß-hydroxybutryric acid and acetoacetic acid (collectively called ketoacids) is the cause of the metabolic acidosis that results from insulin deficiency in patients with diabetes. This life-threatening acute complication of diabetes is called diabetic ketoacidosis. A similar metabolic disturbance called alcoholic ketoacidosis can occur with excessive alcohol intake (binge drinking).

In both lactic acidosis and ketoacidosis bicarbonate is consumed in buffering excess acid.

Finally, salicylate overdose is associated with increased production of several metabolic acids. Since it can also result in concomitant respiratory alkalosis (see above), salicylate overdose represents a clinical situation that can give rise to what is called a mixed acid-base disturbance, to be discussed later.

Excessive IV bicarbonate administration or ingestion of bicarbonate in antacid preparations can potentially cause metabolic alkalosis but this is usually transient because the kidneys have the capacity to increase bicarbonate excretion, if necessary.

In those with renal dysfunction, however, this may not be the case as evidenced by so called milk-alkali syndrome, which is caused by excessive ingestion of bicarbonate containing antacid tablets, and characterized by the triad: metabolic alkalosis, renal dysfunction and hypercalcemia.

Metabolic alkalosis is common in patients with severe hypokalemia. This is due in large part to the movement of hydrogen ions from ECF into cells in exchange for potassium ions; a movement that restores ECF potassium at the expense of increased ECF pH.

Increased reabsorption of bicarbonate is a side effect of some diuretic drugs (frusemide, thiazide) that can be sufficient to cause metabolic alkalosis in a minority of patients.

These physiological responses, collectively referred to as compensation, are reflected in blood gas results and partly explains the counterintuitive notion - alluded to at the top of this article - that patients with an acid-base disturbance may have a normal blood pH.

To understand the process of compensation and the way it affects blood gas results, it is important to recall that the pH of blood is governed by the ratio of bicarbonate concentration to pCO2(a) and that this relationship allows deductions 1, 4 and 5 above. In the case of respiratory disturbances in which pH is abnormal because pCO2(a) is abnormal, the compensatory response is to make an equivalent change to bicarbonate concentration, thereby normalizing the ratio, and therefore pH.

By contrast, metabolic disturbances, which are always due to abnormality in bicarbonate, are compensated for by an equivalent change in pCO2(a).

To illustrate in a little more detail the process of compensation, consider the patient who is suffering diabetic ketoacidosis. This patient is suffering a metabolic acidosis due to an accumulation in blood of ketoacids. As bicarbonate is being consumed in buffering this excess acid, bicarbonate concentration and, eventually, blood pH fall. In order to compensate for the reduction in bicarbonate concentration and return the all-important ratio (bicarbonate : pCO2(a)) towards normal, it is necessary for pCO2(a) to also be reduced.

This is accomplished by increasing the rate of CO2 excretion by the lungs; i.e. increasing respiratory ventilation. In all cases of metabolic acidosis, including diabetic ketoacidosis, chemoreceptors in the brain respond to the rising concentration of hydrogen ions (decreasing pH), causing an increased rate of ventilation. This results in increased elimination of CO2, reduced pCO2(a) and thereby restoration of the all-important ratio (bicarbonate : pCO2(a)) towards normal.

Figure 1 provides a visual representation of pH, bicarbonate and pCO2(a) during all four acid-base disturbances, before and after full compensation; it reflects the notion, contained in the relationship above, that blood pH is a ”balance” between bicarbonate concentration and pCO2(a). 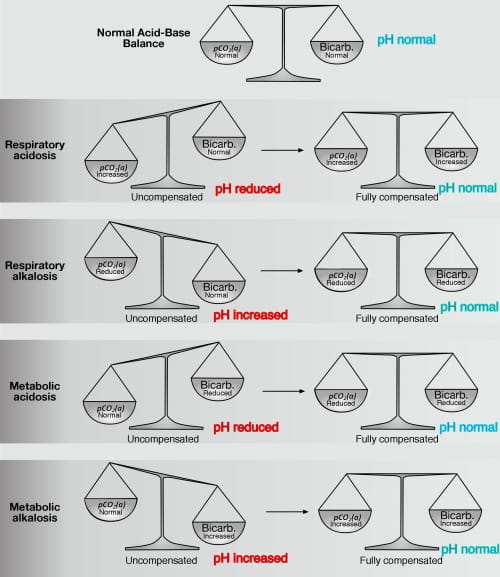 In practice, full compensation is uncommon and overcompensation is physiologically impossible. Thus even with maximally compensated acidosis (either respiratory or metabolic) pH usually remains less than 7.35 (and is never greater than 7.40). By the same token maximally compensated alkalosis (either respiratory or metabolic) is usually associated with pH greater than 7.45 (and never with pH less than 7.40).

Although compensation may not achieve normal pH, it is very common for pH to return very close to normality as a result of maximal compensation.

Given the range of clinical conditions and drug toxicities that cause each of the single acid-base disorders, it is not difficult to imagine many other clinical situations in which patients might be suffering more than one class of acid-base disturbance.

Salicylate poisoning is notable as a single condition that can give rise to a mixed acid-base disorder (respiratory alkalosis due to depression of respiration and metabolic acidosis due to excess (exogenous) acid). In conditions like salicylate poisoning in which a tendency to both acidosis and alkalosis occur together, the two disturbances may cancel each other out, resulting in normal blood pH.

Indeed, they really cannot be interpreted without consideration of patient’s clinical condition and drug history. Single acid-base disorders, by contrast, can usually be identified by reference to blood gas results (pH, pCO2(a), bicarbonate) alone; Fig. 2 provides an algorithm for the diagnosis of single acid-base disorders (with or without compensation). Table I summarizes the most common causes of acid-base disturbance. 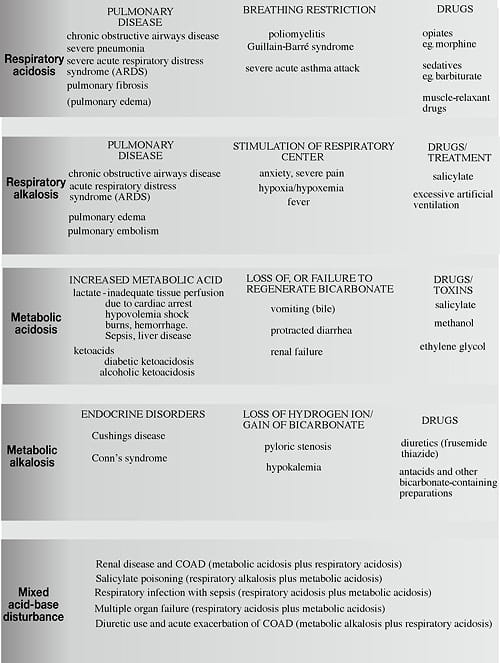 TABLE I: Causes of single acid-base disturbance and examples of clinical situations associated with mixed disturbance

Why measure blood gases? A three-part introduction for the novice - Part 1

Arterial blood gas (ABG) analysis generates a number of parameters (listed in BOX 5) that together...

Why measure blood gases? A three-part introduction for the novice. Part 3.

Arterial blood gases (ABG), a clinical test that involves measurement of the pH of arterial blood...

Why measure blood gases? A three-part introduction for the novice - Part 1

Arterial blood gas (ABG) analysis generates a number of parameters (listed in BOX 5) that together...

Why measure blood gases? A three-part introduction for the novice. Part 3.

Arterial blood gases (ABG), a clinical test that involves measurement of the pH of arterial blood...
All articles