Procalcitonin used in the emergency room

For patients presenting to the ED with symptoms of a suspected infection, measuring procalcitonin (PCT) is a useful diagnostic tool to identify bacterial infections, such as sepsis, allowing for early initiation of proper antibiotic treatment.

In assessing the severity of sepsis, serum PCT levels are an important diagnostic tool, especially in the early stages. However, if a patient has been pretreated with antibiotics or if a bacterial infection is not accompanied by a systemic inflammatory response, procalcitonin is less useful as a marker.

Therefore, a thorough analysis of the patient’s clinical characteristics must be carried out, before treatment is initiated.

In an emergency room situation, a suspected infection is one of the main reasons for seeking medical attention. Cases of bacterial sepsis need to be clinically identified and an antibiotic treatment administered, yet the clinical signs lack sensitivity and specificity.

These infections trigger an inflammatory response syndrome of variable intensity, in which the clinical or biological manifestations (C-reactive protein) are not specific.

Procalcitonin (PCT) is a prohormone of proven usefulness in the diagnosis of bacterial infections, with the power to discriminate between bacterial and viral infections, particularly in meningitis.

PCT has also been identified as a prognostic factor in sepsis, as demonstrated in the emergency room or intensive care units.

Finally, its use reduces antibiotic exposure in patients with respiratory infections admitted to the emergency room or hospital.

Bacterial infections trigger complex pathophysiological processes with diverse manifestations, accounting for a heterogeneous clinical presentation in patients. To improve the classification of patients with more severe infections, international definitions were published in 1991 and reviewed in 2001 [1,2].

It was also shown that early and appropriate management (i.e. antibiotics, fluid resuscitation …) of these stages reduced mortality, and international recommendations were published in 2008 and then in 2012 [3].

However, several problems remain. Firstly, while it is relatively easy to recognize established severe sepsis, this is not always the case for sepsis prior to the onset of severity criteria.

At this stage, there is a lack of sensitivity and specificity of clinical signs, and bacteriological evidence cannot be obtained immediately. With regard to SIRS, it is not easy to recognize its origin as bacterial.

Secondly, within this continuum, it is difficult to predict which patients are at risk of deteriorating. Thirdly, antibiotics should only be prescribed when it is clear that bacterial resistance can be limited without compromising the patients’ chances of recovery.

So we are faced with a three-fold challenge: recognizing bacterial infections, targeting patients who should be given antibiotic therapy (ABT), and identifying patients at risk of deterioration.

This lack of clinical sign sensitivity and specificity has prompted clinicians to consider the value of certain biological inflammatory parameters when making treatment decisions. Among those tested, the most appropriate for an emergency situation would appear to be procalcitonin (PCT).

When the patient arrives to the emergency department and there is a suspicion of sepsis, the following flowchart may be used in our ED (Fig. 1). 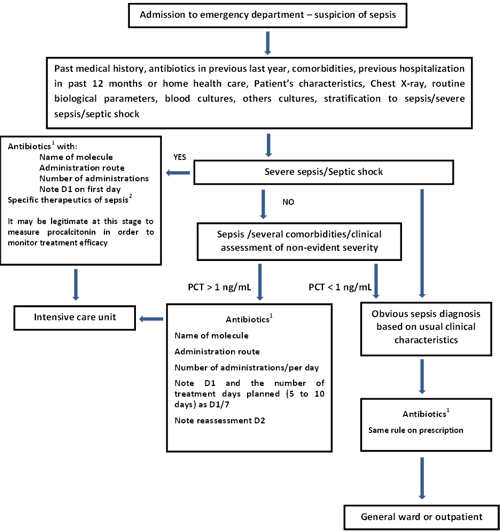 FIG. 1: Decision-making in sepsis. Simplified procedure based on the procedures from the collaboration between Haute Autorité de Santé, the Société de Pathologie Infectieuse de Langue Française and the Société Française de Pneumologie and from the Surviving Sepsis Campaign

One of the first contributions of PCT was its diagnostic performance in BM, as well as its ability to discriminate between BM and viral meningitis (VM). The fact is that in this pathology, clinical signs have insufficient sensitivity and specificity to enable BM diagnosis.

Compared to classic cerebrospinal fluid (CSF), parameters such as CSF glucose, CSF/serum glucose, or CSF protein, serum PCT proved superior for BM diagnosis and for differentiating between BM and VM.

Viallon [4] has shown that with a threshold value of 0.22 ng/mL, PCT differentiated BM from VM in 100 % of cases. A few years later, the same team demonstrated the same discriminatory power, but at the threshold of 0.93 ng/mL [5].

A similar result was also found in patients with meningitis who had a negative direct CSF examination [6].

Other studies published on the same subject did not find these results, demonstrating a lower diagnostic power of PCT. However, patient characteristics were different: atypical germ-induced meningitis (Borrelia burgdorferi, Mycobacterium tuberculosis), nosocomial meningitis, or patients pretreated with antibiotics [7-9]. 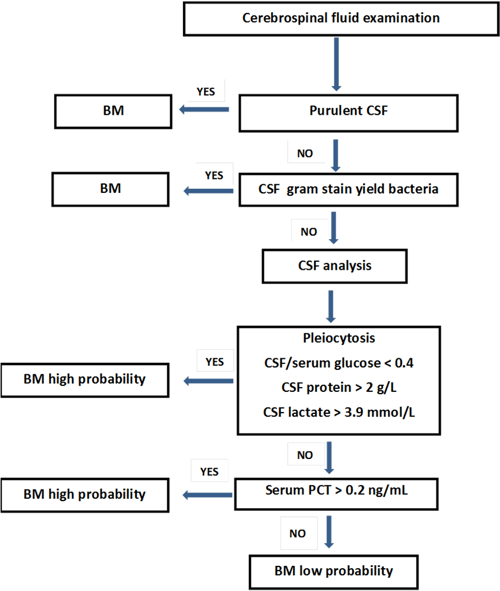 In an emergency situation, the bacterial origin of systemic inflammatory response syndrome (SIRS) remains difficult to establish from clinical or even biological criteria such as C-reactive protein (CRP).

The Wacker meta-analysis [15] sought to determine the power of PCT to discriminate between bacterial sepsis and patients with SIRS of non-bacterial origin.

The studies showed heterogeneity in the populations studied (adults or children, in emergency or intensive care units or general wards, with medical or surgical patients), methodological quality, PCT assay used and the PCT threshold values ranged from 0.1 to 15.75 ng/mL.

The same meta-analysis showed that PCT could help to improve the management of patients with sepsis associated with clinical characteristics.

The same is true for trigger threshold values, which vary widely according to patient characteristics, type of infection, type of microorganism, and cannot be interpreted outside the clinical context.

Several studies evaluated the usefulness of serum PCT levels as a guide to ABT prescription in patients admitted to ER for lower-respiratory-tract infection (LRTI) of the community-acquired pneumonia (CAP) group, or an acute exacerbation of chronic obstructive pulmonary disease (AECOPD).

Christ-Crain [16] enrolled patients admitted to ER with suspected LRTI in a standard group and in a PCT group, about one half of the patients in each group.

In the PCT group, antibiotic therapy was prescribed by PCT level (Table I).

Other studies with a similar algorithm produced comparable results [17]. All of the studies on this subject were combined in two meta-analyses, which had corresponding results [18,19].

The total duration of antibiotic exposure was shorter in the PCT groups. The clinical course was similar across the groups (PCT-guided treatment or not).

It was, however, demonstrated that training programs, separate from any PCT assay, were able to significantly reduce antibiotics prescription [20]. Furthermore, in atypical germ-induced CAP cases, PCT did not rise, or rose only slightly, which was also the case in patients pretreated with ATB. PCT did have sufficient sensitivity and specificity to distinguish viral pneumonia from bacterial pneumonia [21].

Thus a CAP diagnosis should still be on a clinical and radiological basis, as these two elements should make it possible to adapt antibiotics prescription according to the recommendations.

Antibiotic therapy should be reassessed at an early stage, and its duration must be in line with recommendations. It would be useful if this duration, normally 7 to 10 days, could be clarified.

In fact, studies which assessed the duration of antibiotic therapy in CAP showed much variability with durations in the range of 3 to 28 days [22, 23].

We have not incorporated PCT into our antibiotic treatment-deciding algorithm in CAP (Fig. 3). 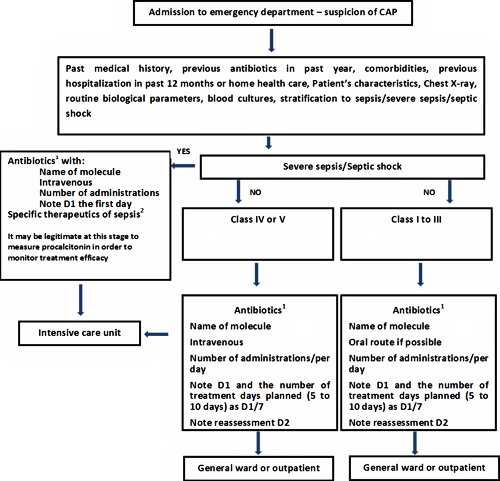 FIG. 3: Decision-making in community-acquired pneumonia (CAP). Simplified procedure based on the procedures from the collaboration between Haute Autorité de Santé, the Société de Pathologie Infectieuse de Langue Française and the Société Française de Pneumologie and from the Surviving Sepsis Campaign.

We have incorporated PCT into a treatment-deciding algorithm in AECOPD (Fig. 4). 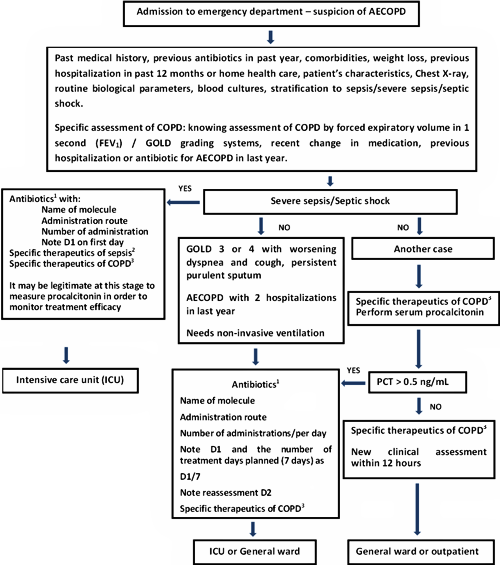 FIG. 4: Decision-making in acute exacerbation of chronic obstructive pulmonary disease (AECOPD). Simplified procedure based on the procedures from the collaboration between Haute Autorité de Santé, the Société de Pathologie Infectieuse de Langue Française and the Société Française de Pneumologie and from the Surviving Sepsis Campaign.

In the event of exacerbated dyspnea with increased purulent expectoration and/or the necessity for non-invasive ventilation, antibiotic therapy was shown to be effective in terms of mortality reduction or the onset of nosocomial pneumonia.

In other cases, prescribing is left to the discretion of the clinician, and durations of 5 to 10 days should be respected.

Elevated serum PCT levels are associated with sepsis severity. The need for early identification of severe sepsis, for which clinical signs have not yet appeared, justifies the use of a marker. Appropriate treatment can thus be put in place and patients can be hospitalized in intensive care.

Several studies have underlined this necessity, the most recent being the ProMISE trial [24].

Viallon [25] has shown that in patients admitted to ER for a suspected infection mortality is correlated with PCT levels, the simplified acute physiology score and serum lactate. Likewise De Kruif [13] has shown that the PCT level at admission was associated with admission to Intensive Care and duration of hospitalization.

Similarly Uusitolo-Seppälä [26] has shown that the parameters associated with sepsis severity are PCT and interleukin-6.

It is advisable to measure PCT in the initial evaluation phase, in the same way as C-reactive protein or leukocytes are measured in the context of inflammatory response evaluation.

Based on our own experience and that of our department, we have incorporated PCT into a sepsis management algorithm, as an addition to clinical evaluation (Fig. 1).

In the light of the data in the literature, we have selected a PCT threshold of 1 ng/mL.

Procalcitonin is a marker of bacterial infection. Discriminatory threshold values appear to differ according to the clinical situation, patient characteristics, the type of microorganism and how the inflammatory reaction is triggered.

Procalcitonin loses its usefulness in identifying bacterial infection where patients have been pretreated with antibiotics, or in the event of bacterial infection without a systemic inflammatory response; hence the importance of a precise analysis of patients’ characteristics.

PCT can assist with the early evaluation of sepsis severity, but it must be combined with clinical evaluation.

In fact, in our emergency medicine room, we find that PCT is a useful adjunct to the clinical reasoning process, helping us to identify bacterial infections when clinical characteristics are insufficient: suspected bacterial meningitis with no bacteria CSF gram stain, in some cases of spontaneous bacterial peritonitis, and in AECOPD patients in whom the clinical assessment does not yield enough information.

PCT is also used for initial assessment of the severity of septic syndromes when the characteristics are difficult to interpret. However, in each of these situations, we do not use identical threshold levels.

The case-specific thresholds that we use are in the range of 0.20 ng/mL to 1 ng/mL. Furthermore, their interpretation varies in accordance with the available clinical data, such as the type of infection or microorganism under discussion, the intensity of the inflammatory reaction that is estimated, the duration of any previous antibiotic therapy, and patient characteristics (immunodeficiency, neutropenia, infection site, etc.)

Alain Viallon
Articles by this author

Differentiating self-limiting from serious lower-respiratory-tract infections (LRTI) based on...

Differentiating self-limiting from serious lower-respiratory-tract infections (LRTI) based on...
All articles