However, predictive values are greatly influenced by the prevalence of the disease and cannot be generalized beyond the studied population.

When D-dimer assays are compared, the comparison is often based on data in literature. In this context literature includes articles in peer-reviewed journals and the information given in FDA decision summaries [2] and in manufacturer’s inserts.

The performance data that can be found here are most often sensitivity, specificity and the negative predictive value (NPV).

As D-dimer assays are used as an aid in diagnosis to rule out venous thromboembolism (VTE) – i.e. deep venous thrombosis (DVT) and pulmonary embolism (PE) – in patients with a low or moderate risk score for VTE, focus is especially on the negative predictive value, because the physicians want to be confident that the patients they rule out do not suffer from VTE.

However, the prevalence of disease has an influence on the negative predictive value, which tells us the percent of all with a negative test that are not ill.

Therefore it would be an advantage if negative predictive values were presented with information about the specific prevalence they were calculated for, i.e.

“NPV is 98 % at prevalence 7 %”. Figure 1 shows how NPV is influenced by the prevalence of disease and in addition it shows the influence that assay sensitivity also has. The influence of sensitivity is due to the increasing number of false-negative results that is the consequence of lowering the sensitivity. 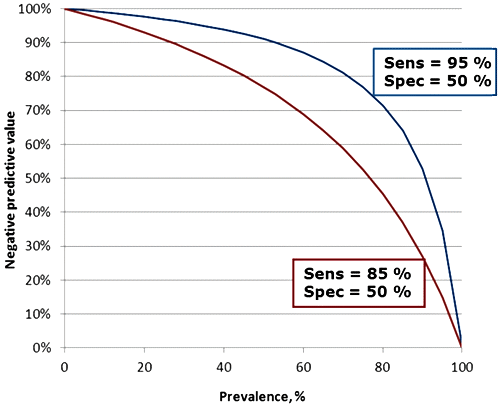 FIG. 1: Influence of prevalence and sensitivity on the negative predictive value. Assay specificity in both cases is 50 %.

The likelihood ratio (LR) is the ratio of two probabilities:

Diagnostic tests are ordered based on the initial assessment of the likelihood of disease (i.e. the pretest probability, which is the probability that a patient has a disease before the test result has become available).

The result of the diagnostic test will help us shift our suspicion one way or the other, and then determine the final probability of disease (the posttest probability, which is the probability that a patient has a disease after the test result has become available).

Likelihood ratios tell us how much we should shift our suspicion for a particular test result.

TABLE I: Interpretation of likelihood ratios

Likelihood ratios depend as seen on the clinical sensitivity and clinical specificity of an assay. The ability of a test to correctly identify patients with and without a specific disease should not vary between patients.

However, it has to be kept in mind that the spectrum of disease found among patients used in a study can have an influence on the clinical performance of the test [3].

If we assume no major differences between patients in compared studies, likelihood ratios are ideal to directly compare two assays. As D-dimer tests are used to rule out VTE in patients with a sufficiently low pretest probability of VTE, we will focus on the negative likelihood ratio (LR–) in the following sections.

Posttest probability is thus the updated probability of a disease in a patient with a specific test result.

Alternatively the posttest probability may be calculated using an Excel sheet or one of the freely available calculators on the Internet.

The pretest determination is based on clinical information and algorithms. There are several scoring templates available. The Wells score (Table II and Table III) is often used. The original scorings included three levels: ”low”, ”moderate” or ”high” probability [4]. The scorings have been simplified to include two levels: ”unlikely” or ”likely” [5]. 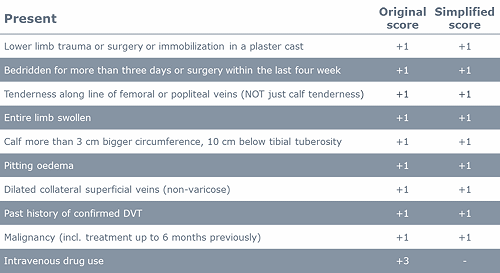 TABLE III: Interpretation of the Wells score for DVT [4, 5]

The performance of these hypothetical assays can be seen in Table IV. 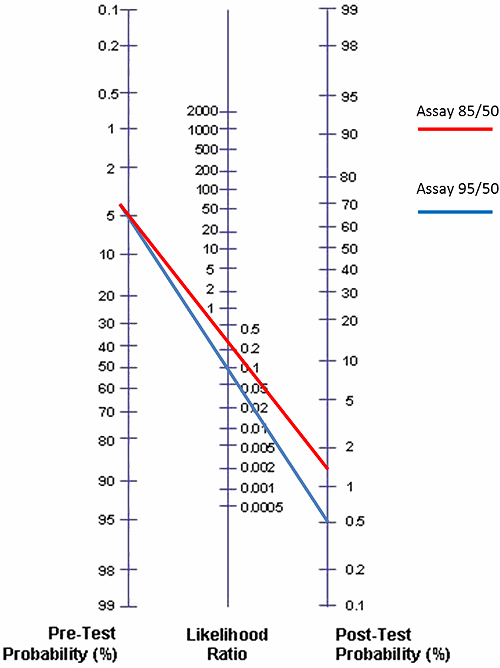 In Fig. 2 we have compared Assay 95/50 and Assay 85/50 using the Fagan nomogram and the prevalence of DVT as 5.0 % (the estimate for the ”low”-pretest-probability group by the American College of Chest Physicians) and the negative likelihood ratios 0.10 and 0.30, respectively.

We see that the posttest probabilities given a negative test are 0.5 % and 1.6 %, respectively. Now what does that mean?

It means that if we use Assay 95/50 for a low-risk patient group with a pretest probability of 5 % and get a negative result, then we know that the probability of the patient having DVT is only 0.5 %.

If we instead use Assay 85/50 for a low-risk patient group with a pretest probability of 5 % and get a negative result, then we know that the probability of the patient having DVT is 1.6 %. This is still acceptable for ruling out DVT in the patients with a negative D-dimer result [4, 5, 6, 7].

How does all this compare to NPV? The NPV is the fraction of test negatives who do NOT have disease. As the posttest probability is the probability that a test-negative patient has DVT, it means that: 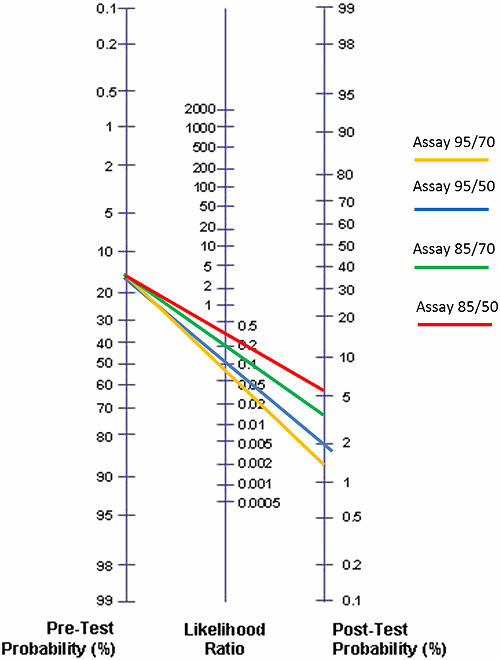 In Fig. 3 we have compared all the four hypothetical assays using the Fagan nomogram and the prevalence of DVT as 17 % (estimate for the ”moderate”-pretest-probability group by the American College of Chest Physicians). We get the results seen in the Table V.

That might have been foreseen in advance. However, when two assays are compared, they usually do not have neither the same sensitivity nor the same specificity. In such a situation likelihood ratios and a Fagan nomogram can be extremely useful.

The FDA requirement for D-dimer assays as described in the CLSI document H59-A is: NPV ≥ 97 % [7]. When this requirement is achieved, 3 % or less of those who are dismissed based on a negative D-dimer result will be ill.

We can see in Fig. 3 and in Table V that only the assays with a sensitivity of 95 % will fulfill the FDA requirement for NPV when pretest probability is 17 % (~moderate risk). That is also why the guidelines for diagnosing DVT and PE group the D-dimer assays that can be used in diagnosis, into [8, 9]:

Likelihood ratios and Fagan nomograms are useful tools for comparing D-dimer assays. By using these tools, posttest probabilities and their corresponding “normalized” NPVs that can be found and used for direct assay performance comparisons.

This gives a more reliable comparison than a comparison of NPVs reported from various studies and separate sources.

Sensitivity and specificity define the discriminative power of a diagnostic procedure, whereas...

Sensitivity and specificity define the discriminative power of a diagnostic procedure, whereas...
All articles